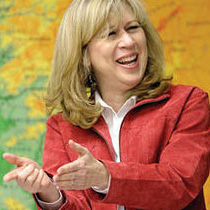 Historically, there have been close ties between the Spanish government and the Roman Catholic Church. Even today Spaniards can designate a portion of their income taxes for the maintenance of church buildings and properties in Spain.

When José Luis Rodriguez Zapatero was elected prime minister in 2004, however, that relationship began to change. Zapatero was perceived to be anti-Catholic, and that created some societal upheaval.

Transylvania students are smart, hard-working, adventuresome, and somewhat spontaneous. It’s such a joy every day.

Transylvania student Leslie Little Gailey ‘06 was doing research into the church’s position in Spain, and she was awarded a grant to travel to Spain with professor Veronica Dean-Thacker to interview writers, publishers, professors, clergymen, and others about this new attitude toward the church. Another Transylvania student, Rachel Wilson ’07, decided to join them.

“Most Spaniards are Catholic but they don’t go to church,” said Dean-Thacker. “They still pass on the values to their kids. They just don’t participate. Before Zapatero came into office, the Franco government aligned itself with the church 100 percent. If people didn’t practice their faith, they were basically turning their back on the government. That wasn’t true, but that’s what the government wanted the people to believe. That was the case for nearly 40 years. We wanted to talk about that with some key people, not only clergymen but professors of sociology, editors of socialist journals.”

The group prepared questions. Dean-Thacker reached out to her network of connections to arrange the interviews, including one with the director of Vatican radio in Rome. While in Spain, the three traveled all around the country for their appointments, talking with dignitaries and absorbing the Spanish culture.

This is the type of enthusiasm and scholarly engagement that Dean-Thacker says is typical among Transylvania students. In her experience, the students love learning and gaining new knowledge, skills, and perspectives. Some of Dean-Thacker’s other students will soon have the opportunity to collaborate with her on a new project: an article about the poetry of an important Basque author, whose works she is collecting.

This active participation among the students can lead to post-graduation success. Gailey, for example, is now working at the Vienna Center for Disarmament and Non-Proliferation. Another graduate is working with the Fulbright Commission in Colombia. Dean-Thacker’s daughter, also a Transylvania graduate, received a summer internship with a federal judge after her first year of law school.

“Many of our majors go on to graduate programs in Spanish language and literature, Hispanic studies, international affairs, and programs in other fields such as diplomacy, law, medicine, and business.”

Dean-Thacker attributes this success to a combination of the students’ motivation and the Transylvania professors’ skillful teaching. “We all try to have a good breadth of knowledge so we can discuss topics in general in addition to our own areas of expertise. We want the students to learn to depend on their own brain instead of what other people tell them. Read primary sources and then read the secondary sources. You decide if the critics are right or not.”

Dean-Thacker particularly appreciates working with her colleagues in the Spanish program. “It’s such a joy of a job. We work very hard, but we love it.”

Poetry and visual art; ekphrasis
The Catholic Church in Spanish history and society
Spanish literature from the nineteenth century to the present

“Bathtubs Teeming with Frogs: Confluence of Form in the Multi-modal Work of Spanish Artist and Poet Margarita Merino.” Advances in Social Sciences Research Journal, Vol 5, No 7 (2018), 228-239.