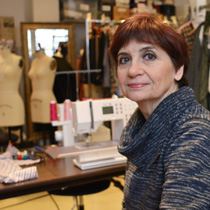 In grad school, someone handed Melissa Johnston a contemporary jacket and said, “Make it look Victorian.” She promptly learned how much research, psychology, artistry, scavenging and minor miracles go into creating costumes, and the essential shorthand they provide. “You’re telling the audience who that character is, quickly, immediately,” she explains.

Johnston has experience in every facet of theater work—including acting, costuming for many area thespians—and eight years in scenic design at Kentucky Educational Television. It was in college that she became interested in what goes on backstage. “It involves many disciplines and talents—science, art, carpentry—all the good stuff. You’re learning from others all the time.”

As Transy’s costume designer and shop supervisor, Johnston can be seen zipping from one end of the costume shop to the other. Around her, stacks of colorful fabrics sit in vivid anticipation and racks of costumes hover between memories and readiness for their next outing. “Costuming is as much about psychology as anything,” Johnston explains. “Making sure the actors stay comfortable? That’s harder to do.” But she and her team strive to bring comfort—as they do for an infamous queen of France and her series of diminishing updos during a production of “Marie Antoinette.”

Johnston has always been drawn to the cooperative, interactive aspect of theater. “You rely heavily on each other,” she says of the unique camaraderie. Her experience in the profession and in her work with students at the college level have made her a champion of theater as an academic major and the preparation it gives for life and the workforce.

“You learn to work with people; how to present yourself; dedication; how to problem solve with other people; how to look at the big picture and not get caught up in the minutia; and how to delegate,” she says. “You also learn about behaviors and what makes people tick. You learn empathy.”

And, of course, Johnston embraces the creativity and imagination within the process, and the fact that each production is temporary. “There’s never the same thing twice,” she says. “I love it when the stage is empty and we get to start over and create a whole new world.”

Costuming the Theater
Introduction to Theater