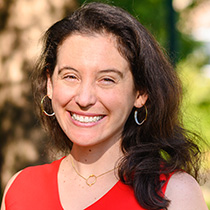 Leslie Ribovich is a scholar of religion, race, and education, with a focus on the twentieth-century United States. Her research and teaching explore facets of American life such as public schools and prisons — areas that are not normally considered religious — especially underlying moral assumptions in those settings and their implications in American culture and history.

Her approach to teaching and research reflects her understanding of religion as a source of community, freedom, and domination. Specifically, she is motivated by questions about how religious actors have navigated the tension between religion as a Durkheimian moral community and religion as a Foucauldian site of disciplinary power.

In classes on race, the Americas, Christianity and Judaism, she teaches religion as an occasion to challenge moral assumptions about the world, especially by examining social categories such as race and gender. Her courses develop units on topics from religious practices of enslaved people of African descent to new religious movements to ask: what is religion? How has religion shaped notions of right and wrong, of similarity and difference, even in spaces we might not ordinarily consider religious? What has religion meant to people, and how have people religiously enacted senses of belonging? Her research on the politics of pluralism and diversity in public education compels her to cultivate collaborative classrooms where, together, students and she discover innovative ways to answer these questions. Together, they engage a range of religious narratives by studying materials by authors with diverse backgrounds and perspectives about topics that are often overlooked.

In her current book manuscript, “Without a Prayer: Race and the Transformation of Religion in American Public Education,” she argues that when intersections of religion and race are considered, we see that religion did not disappear from public schools after the 1960s Supreme Court decisions declaring school prayer and Bible-reading unconstitutional. Instead, public schools and a variety of religious and civic constituents worked together to promote programs such as juvenile delinquency prevention, moral and spiritual values education, and racial integration advocacy, which foregrounded concepts of morality rooted in an invented tradition, Judeo-Christianity and whiteness. This notion of tolerance actively discouraged on the ground change in the area of desegregation, and shaped students’ self-understanding by connecting their race to their moral value. She also has written a forthcoming article on the salvation narrative that undergirded a reformatory for black boys in New York State.

Without a Prayer: Race and the Transformation of Religion in American Public Education (under contract with NYU Press).