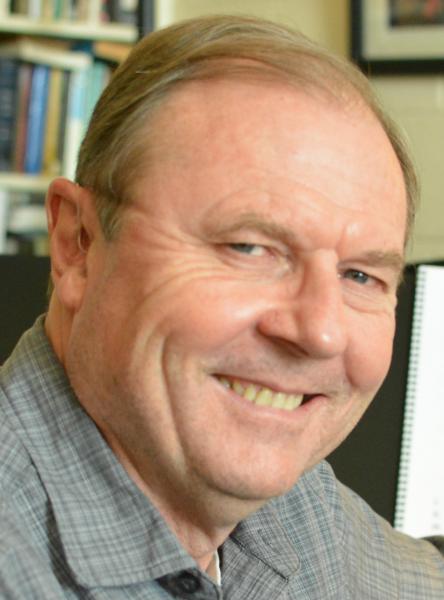 Larry Barnes and his compositions have been all over the map.

His “Morning Gigue” was recorded by the Slovak Radio Symphony and released on compact disc in 1998 and released digitally by PARMA records on iTunes, Rhapsody, eClassical, and Amazon in 2012.

In 2010 he served as the Kentucky/Ecuador Partners Musician of the year, performing his original music and presenting lectures on American popular music in four Ecuadorean cities. In 1992 Barnes traveled in Ireland as an Al Smith Fellowship recipient. And over the last decade he has toured China, Costa Rica, and Senegal as part of his work in world music.

Barnes’s most recent commissions are solo piano works entitled Preludes from Pangaea, composed for and premiered by Louisville pianist Denine LeBlanc. The Preludes, “Vocalise for an Orchid Moon,” “The Devil’s Gamelan,” and “Hibernia,” all explore elements of music cultures outside the Euro-centric tradition, an outgrowth of Barnes’s pedagogical work.

Barnes is a prolific composer. He has completed commissions for bassist Bertram Turetzky, organist Marilyn Mason, the Krefting Piano Company of Cincinnati, the Lexington Chamber Chorale, and the Jefferson Duo and Quadrant Ensemble.

Barnes’s composition “Toccata: Act of War” for piano was selected for a 2007 commercial recording by the Society of Composers on Capstone Records and for a 2011 webcast by Princeton Public Radio in honor of the tenth anniversary of the 9/11 attacks. It is also featured on colleague Gregory Partain’s 2007 CD release Piano Works, Volume II.

In 2008 Barnes provided a complete original score for Euphoria, which took the Gold Award for Documentary at the Houston Film Festival. The film, shown at The Kentucky Theatre in downtown Lexington first in 2009, was shown there again in 2012 during Transylvania’s inaugural August term for first-year students, whose theme was “Making Sense.”

In addition to his commitment to composition, Barnes maintains a strong performance career. He joined the Eastman Wind Ensemble for a performance of music by Hanson, Schwantner, and Copland at Lincoln Center and for a subsequent recording on the Phillips label. He has performed solo recitals in Cleveland, at the Luzerne Music Center in Lake Luzerne, N.Y., in San Antonio, and in Lexington and has performed chamber music with members of the Philadelphia Orchestra, Albany Symphony, San Antonio Symphony, and Lexington Philharmonic.

Barnes even manages to tie composing to other personal interests. He is an avid practitioner of Tai Chi and earned a black belt from Grandmaster Sin The in September 2012. It should come as no surprise, then, that Barnes has created environmental music for the performance of the Tai Chi Chuan 24 and 64 movement sequences. He describes the long form music as “perfect for tuning out the noise of the outside world, or entering a rainforest of sound as you move through the form.”

When your interests lie all around the world and your creativity is boundless, Barnes proves there is simply no limit to the original work you can produce.

Several of Larry Barnes’s original compositions are available on Bandcamp.

Some compositions are available commercially through iTunes, Rhapsody, Amazon, and Eclassical.