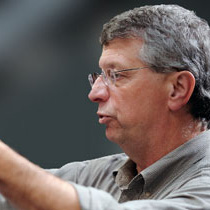 Ben Hawkins has taught at Transylvania since 1985. He conducts the concert band and the chamber orchestra, and supervises the activities of all of the university’s instrumental ensembles, including the jazz ensemble, percussion ensemble, and pep band. He also teaches courses in conducting, music education and music theory, as well as applied French horn.

Hawkins maintains an active schedule of professional activities beyond the campus. Since 2003, he has served as editor of Bluegrass Music News, the official magazine of the Kentucky Music Educators Association. Since 2000, he has traveled to Mexico annually to teach weeklong courses in conducting, instrumental methods and music theory to current and aspiring band directors in that country. Dr. Hawkins has accepted invitations to appear as guest conductor, clinician and conference presenter throughout the United States and in Australia.

Prior to his tenure at Transylvania, Hawkins taught band in grades 6 – 12 in the public schools of Virginia and Texas.  His principal conducting teachers were James Sudduth, Gordon (Dick) Goodwin and Gustav Meier. He studied horn with Thomas Murray (U.S. Army Band), Frank Brouk (Chicago Symphony Orchestra), and Anthony Brittin (Texas Tech University) and Ron McIlroy, and has had individual lessons with Philip Farkas, Dale Clevenger, Ethel Merker, David Elliott, and others.

A recipient of Transylvania’s Bingham Award for Excellence in Teaching, Dr. Hawkins was the 1992 KMEA College-University Teacher of the Year.

Dr. Hawkins is married to Cynthia Hawkins, band director at Jessie Clark Middle School in Lexington. They have two sons, Jay and Turner.