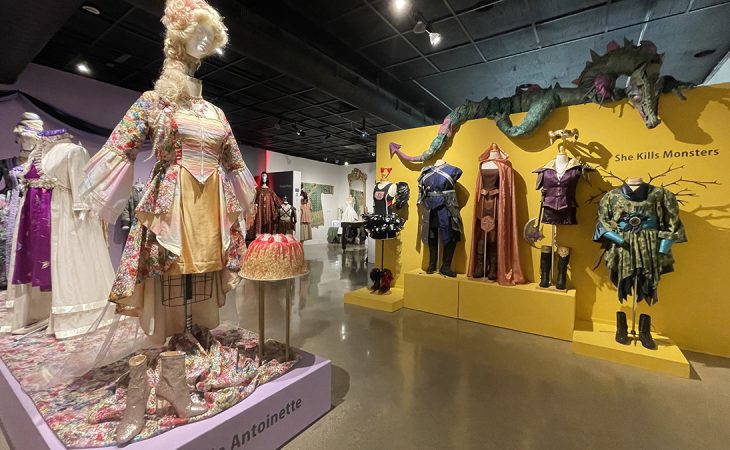 Sometimes the costumes steal the show.

Other times they’re so good they are the show.

Transylvania University’s Morlan Gallery raised the curtain today on its new season with “Missy Johnston: A Fitting Retrospective.” Running through Oct. 7, the free, public exhibition celebrates the theatrical art and career of the school’s recently retired costume designer of 15 years.

Johnston will lead a discussion on the show Sept. 15 at 5:30 p.m. in nearby Carrick Theater, and there will be an opening reception during the LexArts HOP Sept. 16. The gallery is open Mondays-Fridays, noon to 5 p.m.

The exhibition includes memorabilia from Johnston’s career (like newspaper reviews) along with costumes worn in a variety of performances — from “Marie Antoinette” to the futuristic “Mr. Burns: A Post-Electric Play.”

In an opening day message to colleagues, Johnston wrote: “Going through the materials to include in the retrospective has made me realize, even more than I already did, how lucky I’ve been to know and/or work with each and every one of you — and how much your support and collaboration has meant to me personally and to my life as a working artist. The pictures, newspaper articles, opening night notes, and yes, even the costumes you’ve worn, have triggered an avalanche of memories.”

She gave special thanks to gallery director Anthony Mead, theater program director Tosha Fowler — “who came up with this whole idea” — and Jim Gleason, who recorded 20 songs for the exhibit.

Johnston’s professional life has been rich and varied. Besides designing costumes, she’s acted for various local companies and did scenic design for Kentucky Educational Television — where she also hosted “News Quiz.”

Johnston, who has an MFA in playwriting and theater design from Trinity University, has taught courses at Transylvania, including Costuming the Theater.

Read more about her experience in the theater world.