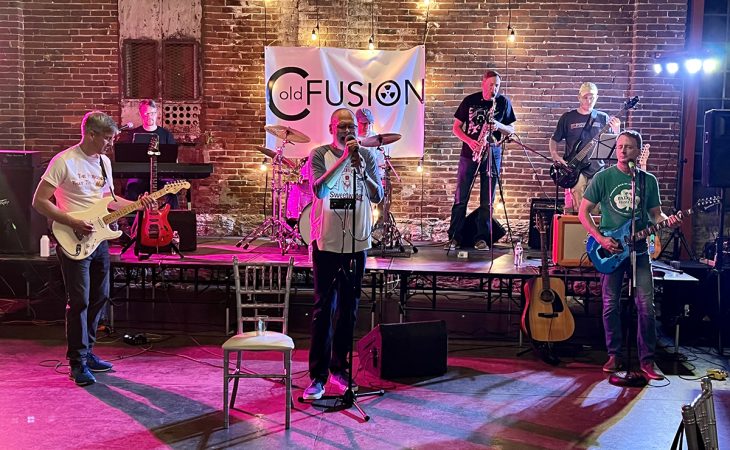 Alumni who attended Transylvania University in the early ’90s may remember the excitement surrounding Cold Fusion — not so much the questionable energy source, but the band.

Known around campus for covers like “Day Tripper” and “Brown Eyed Girl,” these five Pioneers entertained crowds at a variety of venues, from talent shows to Greek events. After all these years, they decided to reunite for an Alumni Weekend performance this past spring.

“It seemed like a fun thing to do,” said Ephraim Woods ’93, a chemistry professor at Colgate University. “We just got a chance to get together and gave it a whirl.”

Woods, on guitar, was joined by the other original band members, Mark Detherage ’93 (drums), Clint Snedegar ’91 (lead vocals), Aaron Thompson ’91 (guitar) and Steven Yelton ’94 (bass)  — along with newcomers Brian Froedge ’93 (saxophone) and Ben Mackey ’94 (keyboard). They played for the Class of 1992’s 30th reunion at Speakeasy in Lexington.

The band members had come together to jam three years earlier at an Airbnb. Yelton said he was actually more nervous during that first get-together, although it was just them. “I hadn’t touched the bass since I put it down the last time we played together.”

As for performing in front of a crowd, Yelton said, “I don’t think we’re going to win ‘American Idol’ or anything, but it was still fun and we had a good time.”

Mackey said he enjoyed getting together with his college buddies. He, Snedegar and Detherage are physicians; Froedge is a retired marching band director; Thompson is CFO of Evergreen Real Estate; and Yelton is in IT. Mackey noted how it was the synergy between them that made it happen. “You have to have all of you to create a good song.”

Detherage also appreciated the opportunity. “It was just a great time getting to see everybody,” he said. “Playing in front of an audience was something we hadn’t done in a while.”

Woods added: “The blessing of it is that when we do get together and say hi to each other, about a minute after that we’re talking as if we saw each other the day before.”