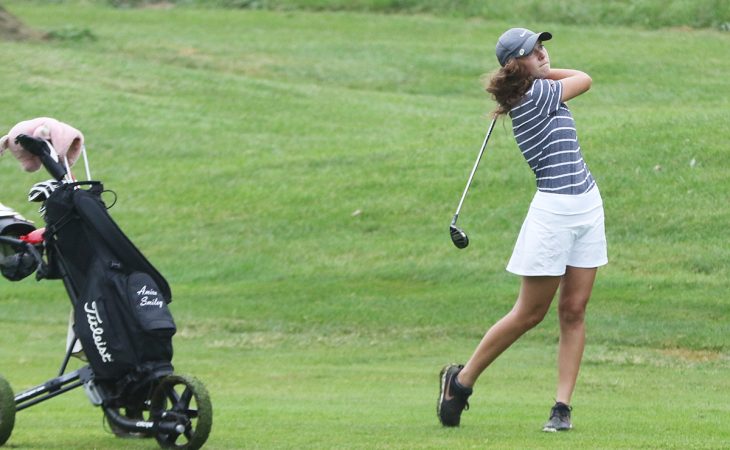 Transylvania University golfer Amira Smiley was recently featured by the PGA Tour for her work ethic, volunteerism and ability to overcome hardship.

Published in advance of this past weekend’s Barbasol Championship at Keene Trace Golf Club in Nicholasville, Kentucky, the article tells the story of how she’s not only succeeding in life but also helping others do so.

The rising junior and her sister were raised with the help of a supportive grandmother after being “brought into a world steeped in unfathomable hardship” as both parents struggled with drug addiction, according to the PGA Tour.

During her first year at Henry Clay High School, Smiley played basketball but later switched to golf, a game her father introduced her to when she was just 3.

Henry Clay girls golf coach Kevin Mims was impressed after seeing her hit at a driving range, and the basketball coach told him: “You won’t find a harder worker or anyone that puts their head down and goes to it as hard as she does.”

Smiley fell in love with the golf and ended up serving as team captain her senior year.

“I can’t speak highly enough about her,” he said. “She is all about giving back.”

Smiley’s friend Alena Woodson told the PGA Tour: “Since finding golf, [Smiley] has been able to go out there and focus on the good things about herself, as an individual, as opposed to all the bad things that have happened to her in her life. When she is out there, she is focusing on exactly what she loves most — golf.”

For later this month, Smiley told the PGA, “I’ve arranged for First Tee kids to come with me to where I work at the Woodhill Community Center, which is a home for at-risk youth. The kids I work with there are underprivileged kids who don’t really have the opportunity to play golf, so we’ve arranged to be able to bring golf to them and see if they might become interested in it as well.”

Both First Tee and Woodhill are beneficiaries of the Barbasol Championship.

WKYT interviewed Smiley at Keene Trace over the weekend. “I try to give back in any way I can with anything that I’m passionate about, whether that’s golf or basketball or just being with kids,” she said. “Me being able to tell my story is a way for me to … show kids who have been through similar things as me you’re not alone — you can do this and come out better on the other side,” she said.

Smiley is studying biochemistry at Transylvania and plans to go on to serve as a military fighter pilot (she’s earning her private pilot’s license).

As for golf, WKYT asked her what’s the most rewarding thing about being out on the links.

It’s knowing that “I’ve worked this hard to get here, and I’m succeeding in what I’m trying to do,” she said.