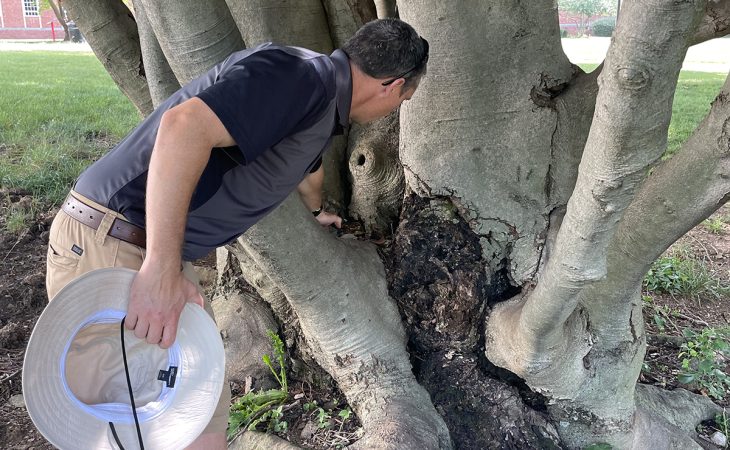 Workers next week plan to remove a decaying American beech tree and then bring in truckloads of soil and sod to regrade the slope in the area and hold the dirt in place. There’s been an issue with erosion around the tree, with soil washing over a nearby sidewalk.

As part of the landscaping, the university will plant another American beech somewhere on campus. It’s part of an overall effort to make sure the school’s trees are healthy (and not damaging buildings).

Just before Arbor Day this past spring, Transylvania replaced a red maple in Carpenter Circle after high winds toppled it. The university also planted other trees, including a black gum where a damaged pine had to be removed near Old Morrison.

As for the most well-known one, the Kissing Tree recently got injections to protect it from the emerald ash borers ravaging similar trees throughout the Eastern U.S. While it may be older than the university itself, the tree is still growing enough that it was necessary to cut away some of the interior of the bench encircling it.

“The Kissing Tree is in really good shape,” said Transylvania Grounds Manager Eric Harshman. (Find out how the tree got its name.)

Other improvements have included preventative pruning of the stately oaks flanking Old Morrison — and Harshman is bringing in an arborist to trim back a red oak to keep it from damaging BSC.

He’s invited other experts he knows and trusts to walk through campus to give suggestions on how to keep the trees healthy.

In the case of the beech, the center section is dead with fungus spreading to other areas. “The best course of action is to take the whole tree down,” Harshman said.

Transylvania’s facilities management is working with local companies and others to ensure wood from the tree can be reclaimed.