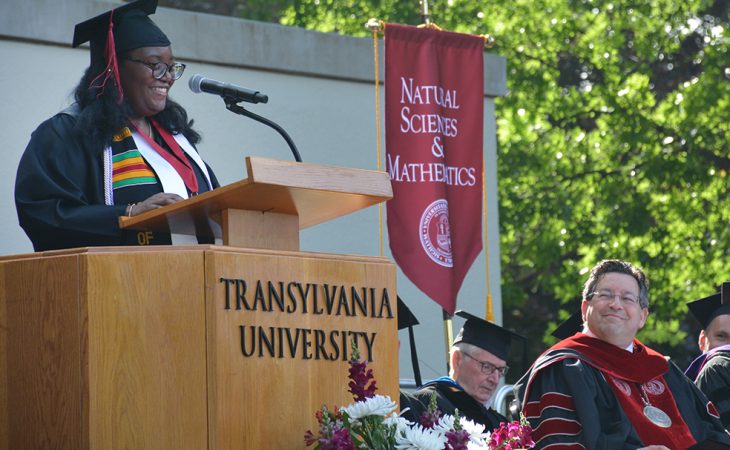 Each year a student representative is selected to speak on behalf of the class at Transylvania’s commencement ceremony. Nyah Mattison, a double major in computer science and digital arts and media, was the Class of 2022 speaker May 28.

A Louisville native, Mattison will attend graduate school at the University of California Berkeley to earn a master’s degree in information management and systems.
She plans to pursue a career in user experience design with the ultimate goal of working in product management.

The following is a transcript of her prepared remarks:

One of my favorite speeches of all time happens to be a commencement speech given 17 years ago at another small liberal arts school less than four hours from where we sit now.

As the students at Kenyon College listened to the late David Foster Wallace valorize the struggles every undergraduate goes through to get to graduation, and how to find your purpose, and what it even means to live a meaningful life, he delivers what has to be the best symbolism I’ve found to describe the time we currently live in.

And Wallace goes on to explain how “the water” is every little thing we do, every little thing we believe that we never have to think about, that we never have to question. It’s the default settings of power and privilege, our desire as human beings to think that we are always the center of everything. And that’s true. He reminds these promising young undergraduates of this as a way to urge them to stay conscious of the world around them, to stay vigilant about the impact that everything they never challenge and unknowingly spread has on the world around them.

But, I want to look at it a little differently.

Despite what the current Y2K fashion revival would have you believe, the world has changed exponentially since Wallace first gave that speech. We are more aware than ever before of the fact that we live in a world characterized by violence and oppression.

We see it everywhere — if it’s not in the news we read, or the podcasts we listen to, or the TikToks we scroll past with audible groans because it’s the 15th one we’ve seen on this topic and we’re already tired of hearing about it, it’s in our classes, or the dining hall, or topical political commentary delivered by standup comedians.

The water isn’t water anymore, so much as a pool of neon-colored warning signs going off everywhere.

But this is one of the things that I love about Transylvania, about being a part of the Class of 2022. Over the last four years here, I’ve been able to witness how much the students of our graduating class care — not just about each other, but about our community, our city and the world around us.

From volunteering their time to local philanthropies, to the rapid-fire social media campaigns, and even protesting in the Women’s March in the middle of downpours, this year’s graduating class has shown me what it means to love.

Is that cheesy? I think it is. But it doesn’t make it any less true.

When we talk about changing the world, we always think about the scientists curing cancer, building robots and flying to space. And I have every belief that we have students in the class that can and will do those things. But changing the world for the better doesn’t always have to occur in bold strokes.

Sometimes making the world a better place is small – it’s looking at all this “water” we live in and saying, “I know I’m just one person, but here is what I can do.” Even if that’s being a little kinder to someone tomorrow than you were the day before, or paying for someone else’s groceries in the checkout line, or spending your day off tutoring at the after-school program that never has enough employees.

Wallace challenged those graduates 17 years ago to change their mindsets. I want to challenge the class of 2022 to change everyone else’s. To be that one drop of water in the larger bucket that makes the world a better place. And to remember our motto: “In That Light, We Pass On the Light.”

I have no doubt that the students of this class will go on to touch the world in unimaginable ways, not just as educators, doctors, lawyers or members of the workforce, but as human beings, connected to each other and the world by the light that Transylvania has given us. And even as we part ways, we’ll do it together.