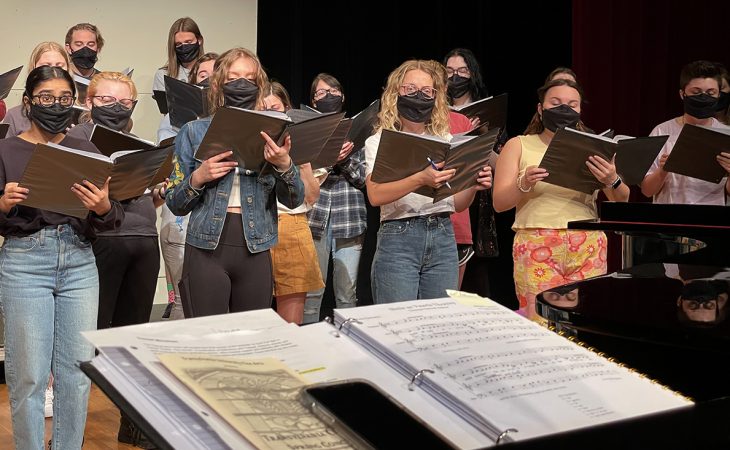 In March 2020, the Transylvania University choirs were two weeks away from presenting “Cabaret” when we left for spring break. We all know the rest of that story.

We had planned to present a “Cabaret Comeback” this past February, but with Omicron we were facing an empty auditorium. So, to use a worn cliche, we put all our songs in one concert. On Sunday at 3 p.m. in Carrick Theater, you will hear two free mini-concerts: “Reflections,” which is focused on serious choral music, and “Cabaret,” featuring a broad range of Broadway and pop songs as well as two group songs from 2020 — “This is Me” and “You Will Be Found” — because they so strongly explore the ideas of acceptance, community and celebrating the uniqueness of every person. These are concepts that resonate with the singers.

The theme that underscores both mini-concerts is a rumination on why we sing: Why is this so elemental to human nature and culture? What does it do for us? Why do we need to sing?

We begin with a gospel arrangement of the traditional “How Can I Keep from Singing?” which led to my posing a set of prompts to the Treble Choir singers asking them why they sing. Weaving through the concert are all 17 statements, grouped by theme, that speak to something in the upcoming song set.

From there, we move into the spiritual “Hold On,” which speaks of steadfastness in the face of adversity. Specialist and professor Eileen Guenther in her work “In Their Own Words: Slave Life and the Power of Spirituals” writes that “the hope transmitted through music was palpable and necessary” for enslaved people’s continued existence. There is an ongoing discussion in the choral world about why spirituals must be sung today, regardless of race, by all singers. It is strongly felt that while spirituals came out of one of the darkest, most oppressive periods in history, the music and textual themes are applicable today, and by singing them, we honor the men and women who suffered so much during the violent years of slavery and use their words and melodies in the ongoing fight against racism.

Next, the mixed choir presents the timeless text “Sanctus” from the Ordinary Mass that has been continuously chorally set since the 12th century. This is followed by contemporary American composer Morten Lauridsen’s expressive setting of a James Agee poem. The popular myth about the inception of this poem is that Agee went out for a last walk on the night he planned to commit suicide. While out, he was overcome by the beauty and strength of nature. He returned home and composed this poem, which speaks about the “starmade shadows” and wonder that surrounds us on our journey.

One final insight into the concert is that the mixed choir worked so hard to learn Sergei Rachmaninoff’s “Bogoroditse Djevo.” After returning from a conference during which the first images of the Russian invasion of Ukraine played across the TV, I faced the choir and said, “It just doesn’t feel right to sing in Russian right now. No matter what Rachmaninoff’s political leanings were (he was against the Bolsheviks and fled), it just feels wrong. I can’t do much, but the one thing I can do is music.” And so we learned Ukraine’s national anthem and joined the ranks of so many individuals and choirs around the world that have sung this beautiful anthem in the weeks since Feb. 23.

Returning to the rumination of why we sing, in the wake of the invasion, I’ve been struck by the videos surfacing of how music is being used as a comfort and coping mechanism in the face of such fear and loss. In one video, a woman sweeps up broken window glass from her apartment while singing the national anthem through her tears. In another is a group of university students sheltering in a basement hallway, rapping a popular Ukrainian artist’s song. There is also a heartbreaking viral video of young girl singing “Frozen” in a subway tunnel, sheltering from the bombs — and there is the one of three Antytila band members standing in combat gear in front of a bombed building, speaking to Ed Sheeran. They offered to appear in his benefit concert from the streets of Kyiv, declaring, “We are not afraid to sing under the bombs. Through music, we want to show the world that Ukraine is strong and unconquered.”

Music and singing is a thread that links our shared humanity. In the face of war, racism, oppression, fear and ignorance, music allows us to declare: We stand together.

This is why we sing.

Regan MacNay is an assistant professor of music and director of choral activities at Transylvania.