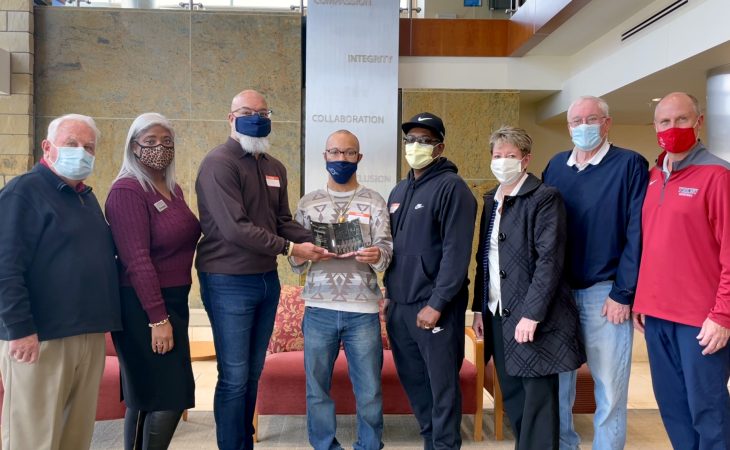 When Robert T. Berry walked onto the basketball court in McAlister Auditorium in 1965, he was pioneering the way for generations of student-athletes to come.

Berry, a Lexington high school basketball star, was the first Black student-athlete to receive a scholarship to play at Transylvania University. Recruited by coaches C.M. Newton and Lee Rose, Berry played the 1965-66 season before transferring to Lincoln University in Pennsylvania.

This week, Berry’s family invited Transylvania officials to visit him at St. Joseph’s Hospital in Lexington, where they recognized him with an award for his historic contributions to the university and its athletics program.

“We celebrate championships, wins and comebacks in sports, but what we should celebrate is the courage it has taken for those who broke the color barrier,” said Vice President for Athletics Holly Sheilley. “Robert T. Berry Sr. did that for Transylvania Athletics. He pioneered the way for so many to go after him. That’s a legacy that goes far beyond wins and losses.”

Sheilley was joined by current and former men’s basketball coaches Brian and Don Lane; Nolan Barger, a former teammate of Berry’s and hall of fame coach; and Deidra Dennie, vice president for diversity, equity and inclusion.

“Life is, as they say, a box of chocolates. You live it and do the best you can with what you’ve got to work with,” Berry said after receiving the award from Transylvania. “I’ve had a fruitful life with my children, my grandchildren, my great grandchildren.”

Berry’s impact on the Transy Athletics family was groundbreaking. “You broke the barriers,” Sheilley told the former Pioneer. “I just want to tell you how proud we are of you for doing that, and you’ll always have a spot at Transylvania.”