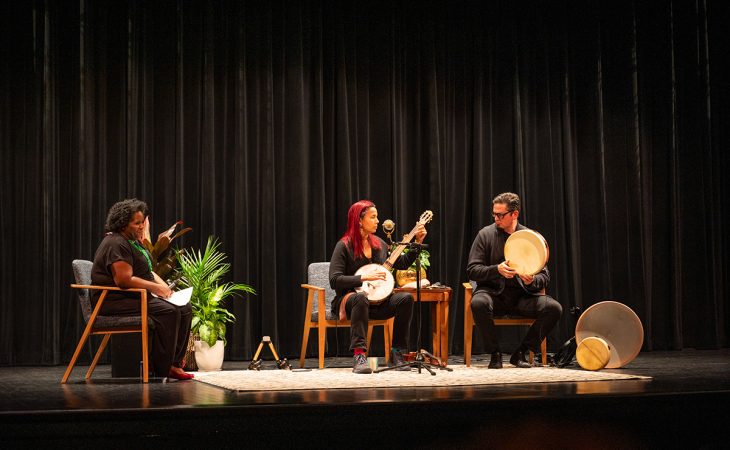 Musician Rhiannon Giddens, who is a MacArthur Genius Grant and Grammy Award winner, visited Transylvania University on Thursday for a public performance and conversation that touched on topics like the historical significance of folk instruments. Before the show, she met with students and chatted about music and finding your path in life.

The event was sponsored by the University of Kentucky’s Gaines Center for the Humanities as part of the 2021 Bale Boone Symposium. Watch it below:

Giddens, who co-founded the Carolina Chocolate Drops, has a lifelong mission to “lift up people whose contributions to American musical history have previously been erased, and to work toward a more accurate understanding of the country’s musical origins,” according to her bio.

During her Thursday afternoon chat with students, Giddens said, “I’ve used my music as a way of trying to highlight social injustice.”

Notable moments in her career have included performing at the White House and receiving an inaugural Legacy of Americana Award from Nashville’s National Museum of African American History in partnership with the Americana Music Association. Giddens also was on Ken Burns’ PBS “Country Music” series speaking on its African American origins, and she appeared on the show “Nashville.”

During her pre-performance chat, she fielded questions from students and discussed a range of topics, from creating music to keeping an open mind about the future.

She told them that when she was in her early 20s, it would have been hard for her to believe she’d end up doing what she’s doing now — and she gave them advice on forging their path in life. “You just have to be focused on what you’re trying to say, what your unique position is on this earth.”

Giddens said sometimes when you’re in college it’s like you’re on a particular path with certain classes you have to take as a way forward. But you have to keep an eye out for offshoots that crop up, ones that can take you to a place where you’ll actually be happier. “But you have to be open to them,” she said.