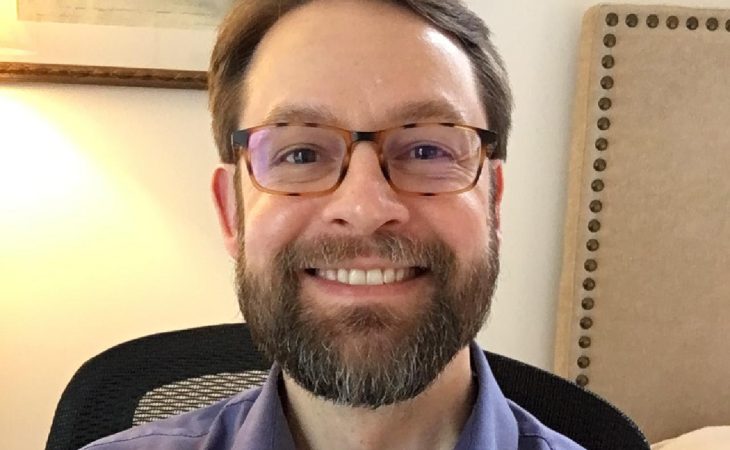 A liberal arts education allows students to explore new sides of themselves and their interests, as well as prepares them for when things don’t go as planned. Dr. Shane Rau, a 1995 Transylvania University graduate, used his education to pivot as his plans for the future changed in big ways.

Rau came to Transylvania with a specific destination in mind — after graduation he wanted to become a neurologist. During his time at the university, he enjoyed the way the liberal arts education allowed him to explore different areas besides those of his major. He was encouraged and able to nurture and explore a lot of himself and his interests, as opposed to focusing only on one aspect of his life.

While attending Transy, he also learned an important lesson that helped him down the path he is on today. “You never really know what your destination is going to be, no matter how much you think you’ve planned for it,” Rau said. “So, it’s important to be able to pivot and make changes in your plan, and I think Transy really taught me how to do that.”

After graduating with a major in biology and minor in psychology, Rau attended the University of Kentucky College of Medicine MD/PhD Program. He put together a plan of where he wanted to go, deciding on becoming a neurologist with hopes of combining basic and clinical science into a career.  However, when he got to the sixth year of this seven-year program and went through the neurology rotation, everything changed.

Rau found clinical neurology wasn’t what he expected, and it didn’t feel like a good fit. Luckily, the next month was the psychiatry rotation, and he fell in love with the field. Hearing the stories of the patients allowed him to look more into the person, as opposed to the diagnosis, which allowed him to easily engage with the patients.

“It just was so much more fascinating for me, and I’ve been really lucky that I made that decision because it turns out, I think, I’m pretty good at it,” Rau said. “I feel like I can really engage with patients easily, meet them where they are. So, it hasn’t been a difficult field for me to be in; it feels like a natural fit, and there’s just so many opportunities — it’s such a growing field and it’s been a lot of fun to explore.”

After starting out in an academic department and moving on to inpatient work, Rau was looking for something to help with his work-life balance. Then, after looking into telepsychiatry, he joined a company called Regroup, which later merged with Insight, becoming Array Behavioral Care.

During his first two years with Array, Rau was 100% doing clinical work, seeing patients, prescribing medications, providing counseling — everything an in-person, outpatient psychiatrist would do, but his “clinic” was virtual. Then, six months ago, he applied for and obtained a promotion.

Rau is now a vice president of Array and is one of the four associate medical directors. With this new role, he focuses on measurements and outcomes, being one of the quality improvement people for the clinical side of the company.

Rau supervises 60 other clinicians and sees if they are providing high-quality care that is helping patients’ symptoms improve. He enjoys “looking at that data, figuring out how to improve the processes and make sure that we’re doing the best that we can for the patients that we see,” he said.

Looking back at his time at Transy, Rau sees how his liberal arts education helped broaden his perspectives.

“I am able to think about problems in a way that’s very different from a lot of my colleagues because I had that really broad base of knowledge and experience coming from a liberal arts education,” Rau said. “I think that’s what Transy really delivers and what I’ve been able to use throughout my life.”

Rau believes that being able to broaden your perspective as much as possible is one of the best ways to get the most out of a Transy education — take classes outside your comfort zone or join a sport or club, even if you are only somewhat interested in it. Experience as much as you can.

The time and ability to look into and experience something that you normally wouldn’t is invaluable, especially since you don’t know what will be useful to you later in life. As you go beyond college and become more specialized, it gets harder to find time to explore new things, so starting with a broad base of knowledge allows you to flex, bend and move along with the flow of change and life.

Lillien Hudson is a psychology major and work-study student in the Office of Marketing and Communications.