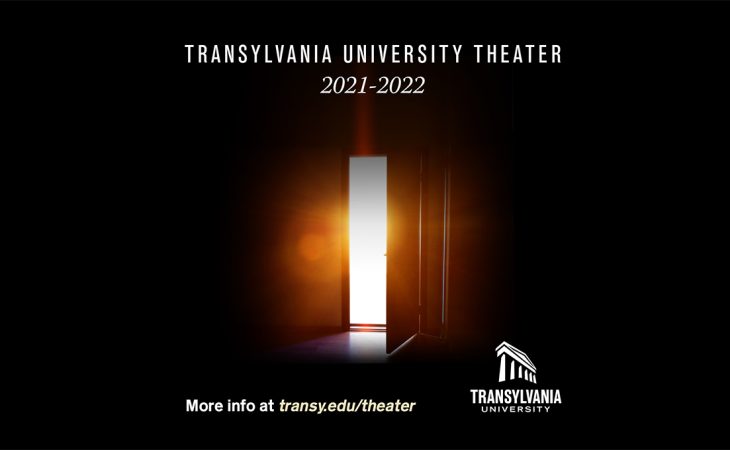 The stage is set for Transylvania Theater’s 2021-22 season, which features an eclectic collection of student-driven shows and a “fitting” exhibit to honor a retiring costume designer.

After coming up with creative ways to move performances online last school year, the theater department plans to invite the campus community and public to in-person performances that follow Healthy at Transy guidelines. “We’ve got some really exciting things happening,” said Tosha Fowler, the Lucille C. Little Chair of Theater and program director.

The season kicks off just before Halloween with the Transylvania Theater Guild’s “Fright Night Play Festival.” In February the student-led troupe will perform “Darkented Doorsteps” written by junior Scottie Gussler.

Another Transylvania student, senior Madison Plowman, is directing the theater department’s November performances of “Exit, Pursued by a Bear,” a revenge comedy by Lauren Gunderson. The playwright also wrote “Silent Sky,” which Transylvania produced in 2019; this fall she’ll engage the cast, crew and other theater students in conversations on the current production.

Transy Theater closes the curtain on the season in May with the musical “Fun Home” directed by Fowler in collaboration with Regan MacNay, music professor and choral director. Fowler said there is a large crossover between Pioneers studying choir and theater. Plus: “The students really wanted to do a musical.”

The Tony Award-winning “Fun Home” is about dysfunctional family members who forge connections despite their differences, along the lines of this year’s campus theme, “Bridging Chasms.”

All of this year’s shows are in Little Theater except for the “Fright Night Play Festival,” which is in the Mitchell Fine Arts Center’s Coleman Recital Hall. Admission is free for all performances but “Fun Home,” which was postponed last year just before rehearsals were to begin because of the pandemic. (The 2021-22 shows were chosen in part because they can be presented virtually if need be.)

Theater Guild president Elizabeth Salamanca said members of the group felt like last year was incomplete — and they look forward to the new season. “We are so excited to come together and safely create theater again. This will be one of the Guild’s most ambitious seasons yet, with two different shows being produced entirely by students.”

This Transylvania Theater season will also be the last for resident costume designer Missy Johnston, who is retiring. An exhibit of her costumes over the years will be on display in the lobby of Little Theater along with photos from her career, which has spanned a variety of roles, from faculty member to musician to actor. “Missy is a real Renaissance woman,” Fowler said.

Get more details on this exhibit and the performances in Transylvania’s 2021-22 theater season.