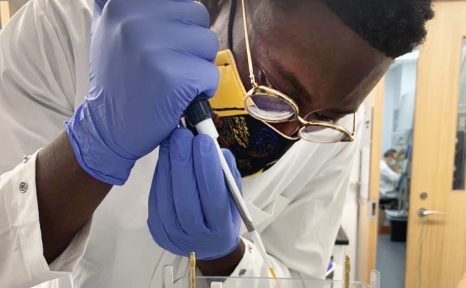 Transylvania biology major Omar Bojang ’22 recently presented the results of his work as part of the STRONG Summer Research Program at the Markey Cancer Center at the University of Kentucky. One of eight undergraduates chosen for the program, Bojang says he was fortunate to join a lab that is at work repurposing a diabetes drug, Metformin, to make it toxic to cancer cells.

The drug on its own has an insignificant effect on cancer cells, Bojang explains. But when compounded with gold, for example, the toxicity increases by 100 fold. His research spins off of that idea.

“My work has been focused on creating similar, metal-metformin compounds that will show similar effects on mitochondrial respiration and, ultimately, cancer cell death,” he says. He gratefully acknowledges Kathleen L. O’Connor, a UK professor of molecular and cellular biochemistry who is the associate director of cancer education and mentoring at the Markey Cancer Center, and Erin Oakley, the education program coordinator. His goal is to continue the research and publish his findings.

Bojang first learned about the STRONG opportunity when Transylvania chemistry professor Eva Csuhai forwarded the application to him. Upon being accepted, he was able to build on what he’d already learned in Csuhai’s organic chemistry labs and put his liberal arts training to work. By the end of the summer he had learned many lab techniques and gained confidence in the entire process.

“Now,” he says, “I feel like I can walk into a lab, have an idea and draft an experiment that is sensible and will prove the idea right or wrong. I can set up something that is actually valuable information for other people.”

Part of the daily learning, he notes, came from being able to work alongside professionals and see how they think. “It showed me how to think like a scientist, how to think in intellectual ways and actually do significant things that hold significant purposes.” Having these professionals value his ideas, too, “was really big,” he adds.

Throughout the eight-week experience in scientific research, Bojang says he felt the impact of Transy’s liberal arts at work — the “dabbling in multiple forms of intellectuality.” He learned that being successful in science requires similar multiple proficiencies: being accomplished in the science, but also in the ability to write and communicate information and to collaborate with colleagues.

“There are so many facets to being a researcher other than just the actual research,” he explains, “that I feel like it’s a multifaceted art. You definitely need multiple skills for it.”

Bojang, who grew up in Lexington, is a legacy student at Transylvania. His father, Mambuna Bojang, graduated from Transy in 1996 and works in the university’s IT department. Omar Bojang’s goals are to attend medical school and then to practice medicine in West Africa, which his family once called home. It’s a call to service he has felt since middle school.

“That would be amazing to me. It’s something that drives me a lot,” he says. “Where medical practices aren’t necessarily as advanced, people suffer because they’re not getting the kind of medical help that would be seen as something very simple in the United States.”

With the help of Morrison and a Legacy scholarships, he is advancing toward these goals. “Scholarships opened up the opportunity for me to get my education and to go to a school as prestigious as Transy. They have also opened the door for me to do things like the STRONG program. I’m getting that liberal arts education, and I’m really able to think in different ways and to use multiple experiences to get the most out of this experience.”