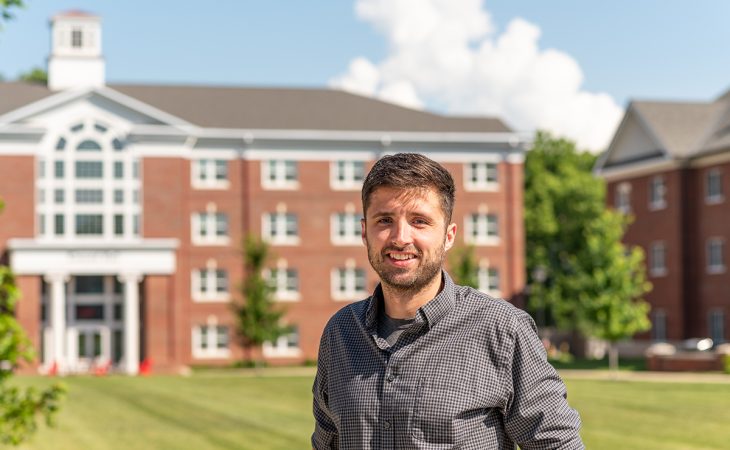 Moving from a large university with over 4,000 incoming first-year students annually to a small liberal arts school is a big change, but it is one that Keith Jones decided to make. Excited to get to know students individually and ready to create a more dynamic campus experience, he recently began working as director of housing and residence life at Transylvania University.

Originally from Lakewood, Washington, Jones started his journey at Washington State University, where he earned a bachelor’s degree in sports management. “I knew in high school that I wanted to do something athletic related, and that was the nearest school — pretty much the only school — within several hundred miles that offered that program,” he said.

After graduating, he began coaching at an elite junior golf academy. Though he enjoyed it, he began looking for the next step in his life. That next step was at Texas Tech University, where he studied higher education administration.

“I began applying for programs all over the country in different disciplines, and that program, that opportunity, it just kind of stuck; it was what I needed and at the right time,” Jones said.

Before coming to Transy, he worked in the housing and residence life office at the University of North Carolina at Chapel Hill. He fulfilled several roles over the next seven years, including overseeing the programming of all of the residence halls.

Last year, Jones and his partner, a Kentucky native, decided to move to Lexington. “We examined where we could see ourselves being for the next several years,” he said. “And this area lent best to that.” Through connections they had from friends who attended and worked at Transy, Jones learned of the university and the opportunity to work as the housing and residence life director.

He is continuously impressed about how greatly involved the students are as he settles into his new office on campus and hears from student leaders about their perspectives on issues. He is learning about how a few voices at Transy create a large impact.

“When you work at a very large institution, you don’t necessarily have such a close grasp on what is happening at such a student-driven level; you can only get a perspective from a small portion of students,” Jones said. But at a smaller school like Transy, you can get a deep understanding of what’s going on from only a few student leaders.

Jones wishes to prioritize creating a dynamic experience on campus, to reimagine what it is like to live on campus in our new world. He wishes to reestablish tradition and find ways to engage safely and comfortably in a more vaccinated society.

He also encourages students to reach out and talk to him, whether about something on campus or if they only want to talk to someone for a bit. He would happily share his collections of movies, board games and knickknacks he collected during his travels. Or, if they would rather talk about sports, he does play competitive volleyball.