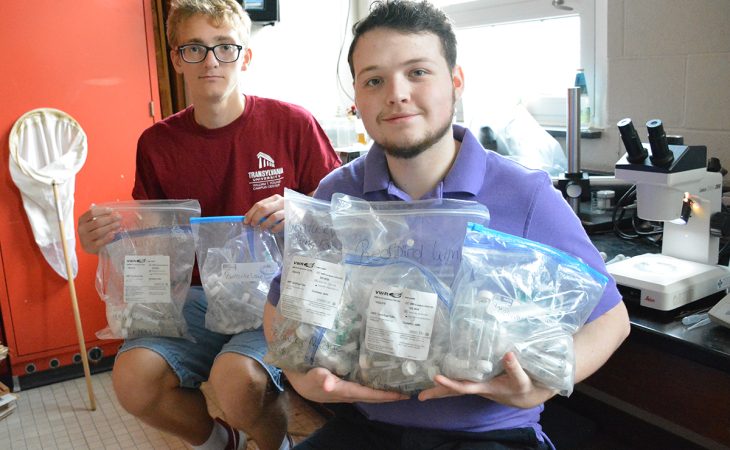 Two Transylvania University students are getting rare undergraduate research experience this summer as they explore how land use might impact the prevalence of the West Nile virus.

Rising senior Colby Grant, with the assistance of classmate Daniel Peter, is collaborating with biology professor Elizabeth Loh and the Kentucky Department of Fish and Wildlife to collect and identify Culex mosquito larvae. Grant received an award from the school’s Kenan Fund for Faculty and Student Enrichment to help carry out the work.

They’re trying to find out how undeveloped versus disturbed areas — think tire tracks, timber cutting and litter — influence the number of these larvae. After they collect samples in the field, they’ll bring vials swimming with the young mosquitoes back to the lab for a genus ID under a microscope. Adult Culex mosquitoes transmit West Nile.

“It’s been a wonderful opportunity,” said Grant, who’s begun working on data analysis of the recent samples, along with some collected last year. So far it appears the greater the disturbance of land, the more larvae there are. (Other research has shown transmission of the virus is highest in urban and agricultural areas, in part because of abundant hosts and vectors, according to his funding request.)

Loh pointed out an important ecological aspect of the work: “Outside of the obvious public health implications, this research is also informing where the wildlife department will prioritize conserving habitat for ruffed grouse, whose population is declining in its historic range in Appalachia due to habitat loss and the West Nile virus.”

While four of Loh’s students have assisted with her mosquito research project, Grant and Peter are the only ones who’ve done the fieldwork. “I think getting out of the classroom and into the field is a really important part of biology and helps students learn the process of science,” she said. “They start to make their own observations and develop their own questions, which in turn builds their scientific confidence.”

Peter said he was looking for an opportunity to conduct research alongside a professor when he heard about Loh’s project, an uncommon opportunity for an undergrad.

Both students (who attended high school together in Lexington) are studying biology, and this research can benefit them when applying to graduate school.

Grant said the mosquito project ties into a trend in biology called “One Health,” an interdisciplinary approach “with the goal of achieving optimal health outcomes recognizing the interconnection between people, animals, plants and their shared environment,” according to the Centers for Disease Control and Prevention.