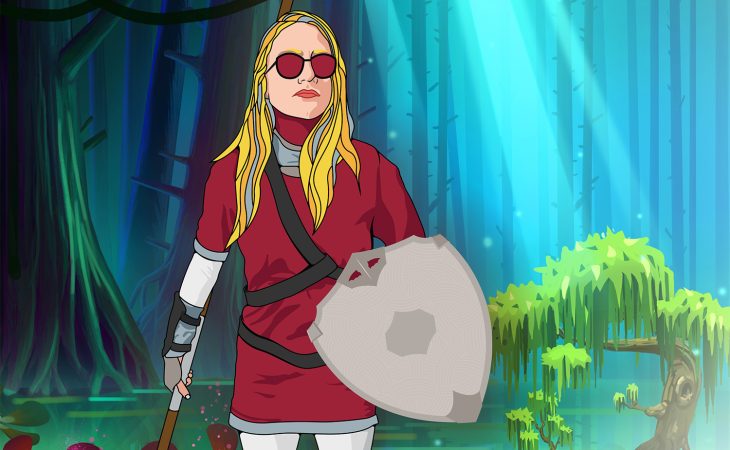 For Erin Marek ’16, a scuba-diving, Arctic Circle-researching, video game-playing, sword-wielding, track and soccer athlete, it’s been a journey — not unlike the video games that inspire her — of challenges and feats, of personal development and clarity of passion.

Marek recalls the summer before her senior year at Transy, hiking up and down a mountain in Sweden for 13 hours a day, gathering soil samples and running lab tests. A successful biology major with a variety of paid summer research internships notched onto her CV, Marek suddenly found herself in the midst of an epiphany. Looking around at her peer researchers, she could see that she lacked their level of passion for the work.

“I remember thinking, ‘Man, I don’t know if this is something I can do for the next 40 years of my life.’” Rather than panicking, she thought hard about what she really enjoyed doing and realized it was video game design. “At the time I was a dungeon master,” she says, a game organizer who controls many components of the game. “I loved doing that. I’d been doing it for 10 years and I could keep doing that — and do it all day, if I needed to. That’s kind of like making games,” she realized.

But how would she make such a radical transition from biology major, with an emphasis on ecology and conservation research, to being a competitive candidate for a top master’s program in game and interactive media design?

“Luckily,” she explains, “I had found a passion in art history at Transy and was majoring in it on the side. It was just something I really enjoyed.” That freedom to explore new subjects, so integral to a liberal arts education, had allowed her to develop new interests that could translate handily. So, when Marek returned to campus for her senior year and told her professors that she wanted to go into the video game industry, they readily gave her the flexibility she needed to change direction on a dime. They helped her understand the groundwork she’d already established.

“You can use a lot of the skills you learned in art history and apply those to what you might be doing in the game industry,” she remembers her professors telling her. Working with them, she zeroed in on subjects for her two senior thesis papers that were at once focused on art history, but also related to the game industry.

For example, she looked at the visual art of video games from the perspective of art history, researching women’s armor. Traditionally, video games have represented a highly sexualized way of looking at women, most often depicting even heroic characters as scantily attired with no real protection. As a female gamer, this had bothered Marek. It made no sense in terms of practicality. And, as research for her thesis demonstrated, this tendency toward the degradation of women had a negative impact on girl gamers and the entire gaming community.

These days, half of video gamers are female and 40% of the world’s population now plays. Gone are the days that once justified catering to the predilections of the stereotypical adolescent boy. Marek’s perspective is no longer in the minority and is of increasing value to the growing industry that already dwarfs Hollywood box office and music industry revenues.

But first she had to get her foot in the door.

In her application to the master’s program, she touted her unconventional background that set her apart from other candidates. She emphasized how all that she’d learned at Transy was directly applicable to her future career: the organization, methodology, data analysis and interpretation that she learned in science; the inclusive and collaborative culture in the classroom and in team sports; the openness and interest in listening to multiple perspectives; the fearlessness in taking on new challenges; the simultaneous development as a generous leader and team player; and the supportive relationships and mentoring modeled by faculty.

“I had a lot of really great mentors at Transy,” she says. “I had some amazing biology professors and art history professors. They really cared about me and my success and were willing to take the time. They believed in me, and I think that really made it easy for me to believe in myself — that I could do what I wanted to do.”

Marek sees all of these dimensions playing out in her day-to-day work as development manager at Riot Games. “I manage a team, so I help develop the work systems they use to make the games,” she explains. She enjoys mentoring and supporting their efforts and helping everyone align toward a central goal.

“I function as a delivery lead, and I partner with a product lead. My product lead is actually another female, which is super cool that you have two females leading the in-game initiative for Wild Rift. And we have a lot of other great females on the team, too. The product partner lead focuses more on ‘what are we making and why are we making it,’ and I focus more on ‘how are we making it and when.’ Together we collaborate to make that happen with our team.”

Most recently, Marek’s team released Wild Rift, the mobile version of the popular game League of Legends. Mobile play is central to industry growth and, as she explains, to expanding the female audience. Her team’s work is comprehensive.

Being part of League of Legends is a sort of coming full circle for Marek. It was the game that she and her brother chose to play as a way of staying connected when they moved to different states. Video games, she notes, have always been a way for her to bond with her brothers. And it was their mother’s penchant for gaming that introduced the family to the sport.

Grateful to be part of the game-making she loves, Marek understands the opportunities she has in joining the industry at a time when it is open to change. Her long-term goals encompass being an executive producer and replacing stereotypes with more genuine characters that better represent the players.

“I would love to focus on diversity and inclusion in games,” she says, “representing people who haven’t been represented, reaching out to a broader audience, as well as depicting women and men equally in video games, instead of having a more biased perspective as sometimes you see in certain games.”

Accomplishing this, she says “is about breaking down what those class, race and gender stereotypes are, and really just making characters that feel honest to people who actually exist. A lot of that comes from having people in the game industry who come from diverse backgrounds, who represent a broader perspective than what I myself or somebody else might be able to bring.” Helping people understand different audiences and perceptions is part of the effort.

At Transy, Marek learned how to question why things are as they are and to have the confidence to challenge what needs changing. The opportunities to push herself to develop an open mind and to trust herself, she says, “have carried over to my professional and personal life.” She recognizes the value of “having the flexibility of mind to be able to adjust to circumstances and not to get stressed or anxious around things you don’t understand or don’t know.”

Marek’s unconventional path led her precisely to where she needed to be. “It definitely was a wild ride,” she says with laughter. “But because of my diverse education at Transy, it made me a strong applicant. If I’d just had biology and not art history, I’m not certain that I would have gotten into the grad program that led me to getting my job in the industry,” she adds. “And it was with the support of a lot of people that I ended up getting into my grad program.”