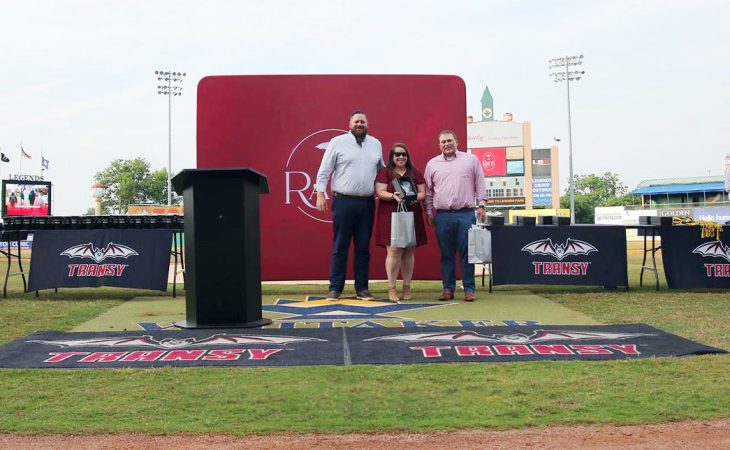 The Transylvania Athletic Department celebrated a unique and comprehensively successful 2020-21 season with the 2021 RAFY Awards Monday evening at Legends Stadium.

Held outdoors for the first time ever at the home of the Lexington Legends and the Transylvania Baseball program, the red-carpet event celebrated the individual and team achievements of Transylvania’s 27 varsity programs during the 2020-21 academic year.

The homefield advantage was enjoyed by Transylvania’s baseball team, which was named the Pioneer Team of the Year to cap off the awards show. The Pioneers cultivated a 31-10 overall record in the 2021 season to match their most wins in a season and won the Heartland Collegiate Athletic Conference regular season and tournament championships to advance to the NCAA Tournament for the first time in 13 years.

The RAFYs marked another step in the return to normalcy for college athletics and Transylvania’s student-athletes, many of which competed in seasons delayed to the spring of 2021 or had their seasons cancelled or condensed. After the 2020 RAFY’s were presented in a virtual-only format, Pioneers student-athletes were able to gather at Legends Stadium to celebrate their seasons for the first time together.

Transylvania volleyball head coach Amy Barmore and her staff repeated as Coaching Staff of the Year. Barmore rallied a resilient Pioneer volleyball team which had to wait until January to begin its 2020 season as the Pioneers repeated as HCAC tournament champions for the second straight year.

Under Barmore and her staff including assistant coaches Darby Bourdon, Michael Ortman, and Tiffany Horton, the Pioneers achieved their highest AVCA national ranking in program history, soaring as high as a ranking of No. 3 in the country on the way to etching a 15-3 overall record.

A poignant moment of the RAFY awards was the awarding of the Inspiration Award to Transylvania’s Athletic Training Staff, who devoted ceaseless efforts to ensure the safety and health of student-athletes during the pandemic. Nick Reuss, Kyle Sutton, and Christa Hendley accepted the Inspiration Award for their resilience and service through an unrivaled challenging year.

The awards are named after the Pioneer mascot, Raf the Bat, which was introduced in December of 2017.

Visit the Transy Sports Network online to watch the full broadcast of the 2021 RAFY awards on demand.

Team of the Year – Baseball

Pioneer Athlete of the Year from a Female Sport – Porsche Robinson, Women’s Tennis

Pioneer Athlete of the Year from a Male Sport – Trenten Toivonen, Men’s Lacrosse

Coaching Staff of the Year – Amy Barmore and Transylvania Volleyball