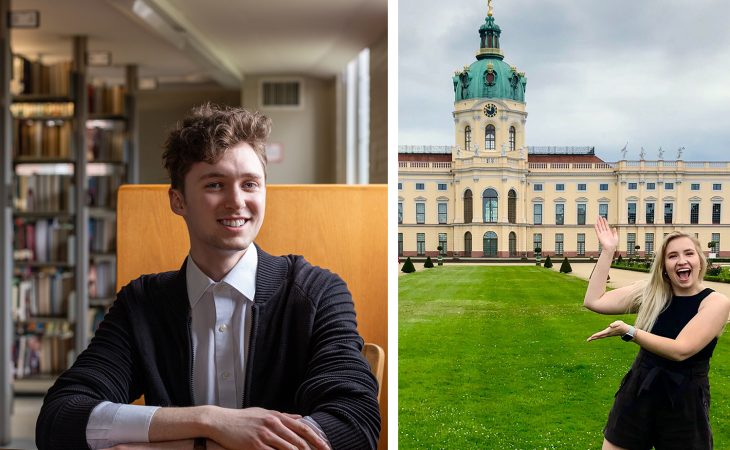 Savannah Lambert and Jordan Strouse, who bring the school’s number of Fulbright recipients to 24, were selected for their leadership and academic abilities — out of what was the largest pool of applicants ever.

Lambert, of Georgetown, Kentucky, plans to teach in Germany, where she spent a semester in 2019 at Universität Regensburg. With plans to pursue a career in diplomacy, she’s an international affairs and German double major and served as a study abroad peer ambassador at Transylvania.

“I am incredibly honored and excited to be named a Fulbright ETA finalist,” she said. “I cannot thank the faculty and staff members who helped me through this process enough — they did everything from proofreading essays and writing recommendations, but also led me to opportunities to grow and learn.”

Lambert eventually plans to pursue a master’s in international education at George Washington University. “I am so grateful for the global experiences and education Transy has given me, and cannot wait to put that to use,” she said.

Strouse, of Lexington, will serve as a teaching assistant for 11 months in Taiwan. He also received the prestigious Boren Scholarship to study Mandarin at the National Taiwan University, but chose the Fulbright instead.

The Fulbright will help Strouse along his path to becoming a linguist in a government setting. “I’m particularly interested in working in the intelligence community on national security issues. As an international affairs major here at Transy, I’ve got the foundational skills for this career; the next year in Taiwan will allow me to further develop these skills and gain on-the-ground cultural and linguistic knowledge.”

He also credited staff, faculty and fellow students at Transylvania for the support that helped him win the awards — from writing solid applications to friends who inspired him.

“Both Savannah and Jordan have been leaders on campus, inside and outside of the classroom,” said Michael Cronk, associate director of career development. “We are incredibly proud of the work they put into their applications and congratulate them on this auspicious accomplishment.”

The U.S. Department of State’s Bureau of Educational and Cultural Affairs sponsors the Fulbright student program, which was established 75 years ago to foster mutual understanding between the United States and other countries.