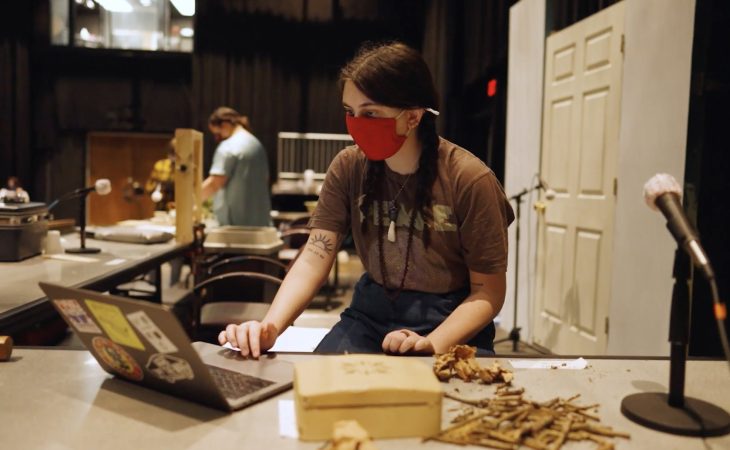 Take a look behind the scenes of Transylvania Theater’s “Carmilla: A Vampiress Radio Play,” which premiered here today.

In this video, Daniel Bennett, theater instructor and production technical coordinator, talks about how the podcast brought students together from many different majors to work on the same project. “It’s allowed us to have that sense of community, which is something that theater inherently provides.”

The other two episodes come out March 26 and April 2.

The play is an adaptation of a story written in 1872, predating Bram Stoker’s “Dracula.”

Female vampires unleash themselves in this Victorian story of horror and desire. A young woman living in a remote castle becomes intrigued by a mysterious house guest, the enigmatic Carmilla. As the neighboring countryside and villages fall victim to a series of unexplained grisly murders, young Laura finds herself swept up in a whirlwind of forbidden passion quite extraordinary for a 19th century woman.

For the Transylvania production, physically distanced students produced sound effects on a foley stage set up in Little Theater. They used things like celery to make neck-biting noises and a bag of water and cornstarch to mimic the sound of a body hitting the floor.

“Carmilla” is the theater department’s second production after the pandemic closed the curtain on in-person performances. It comes on the heels of the multimedia “Railsplitter,” which was a collaborative effort by faculty, staff, students and alumni.

“We are continuing to engage students in artistic work through the pandemic,” said Tosha Fowler, Lucille C. Little Chair of Theater and program director.