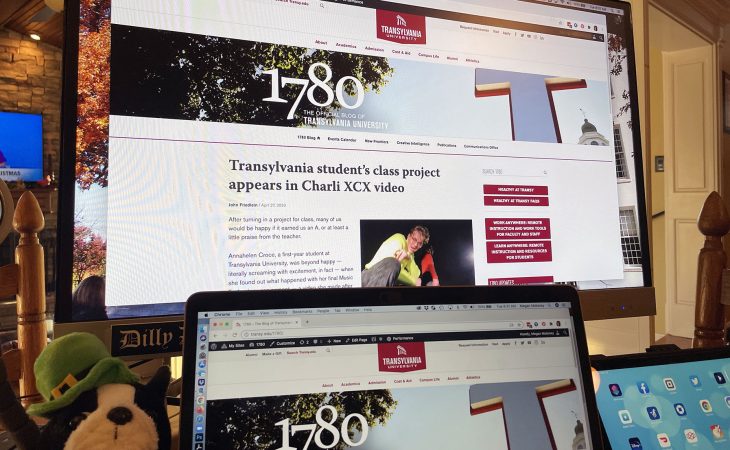 Throughout 2020, Transylvania University’s 1780 blog has been a reliable source for campus news while spotlighting faculty, staff, students and alumni who have faced this momentous year with courage and creativity. Here’s a look at the top five most popular posts.

The university’s Dean’s List is always popular with students and their families and friends, who enthusiastically keep up with their academic achievements. Published in February, this announcement is also sent to students’ hometown newspapers.

Getting a new president is always big news for a university. Back in January, Transylvania announced that Brien Lewis had been chosen as the school’s 27th president. The strength of the school’s culture, priorities and its willingness to innovate drew him to the 240-year-old institution. “Transylvania should build on its enduring strengths: a highly personal learning environment infused with its core commitment to academic excellence and a powerful sense of community,” said Lewis, who had served as president of Catawba College in North Carolina. He began at Transylvania on July 1.

President John N. Williams ’74 in May discussed how the university planned to reopen campus while ensuring the health and safety of the Transylvania community. This announcement included details on adopting a modular curriculum meant to facilitate a quick change in instruction if that became necessary. It also highlighted different courses of action the university could take, depending on the health situation. This nimbleness was necessary because at the time so much was unclear about the pandemic.

Two months prior, other major announcements by President Williams were included in a campus update — they included a switch to remote learning, extension of spring break, cancellation of events and suspension of spring sports. This news understandably drew a lot of attention to the blog story.

The most popular 1780 blog story of 2020 exemplified the university’s commitment to the digital liberal arts. First-year student Annahelen Croce’s final Music Technology assignment — a video she made after being inspired by singer-songwriter Charli XCX — was actually incorporated into a music video by the British pop star, a fan-sourced montage that included snippets of people’s quarantine experiences.