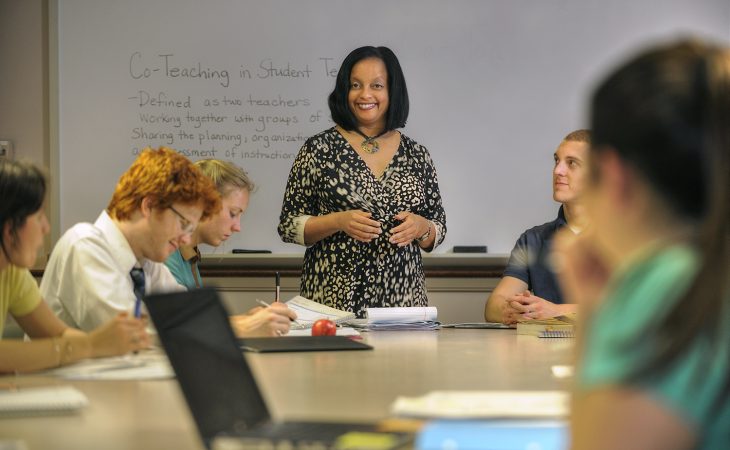 The following article appears in the Summer 2020 issue of Third & Broadway magazine.

Tiffany Wheeler ’90, professor of education and alumni award winner, remembers the moment she became aware of race. As a fourth grader away at camp for the first time, she found herself in the novel position of being the only Black child among her peers. All was well until a hurtful question posed by another camper made her jarringly aware of his perception of their difference — a negative difference. It was something she’d never felt before growing up in what she describes as the fairly diverse and integrated community of Albion, Michigan.

“The summer camp incident made me realize that race matters, even to elementary-aged students,” Wheeler explains. It would become the first of a lifetime of exchanges that undermine and diminish.

Writing about her journey as an educator, Wheeler depicts the steady presence of prejudice and how it presses against progress, even for a high-achieving student and a seasoned professor. She helps to clarify how a society or community that is defined by whiteness, often under the guise of being neutral or the norm, remains dominated by the unspoken values of white supremacy. The macroaggressions and microaggressions (to use 21st century parlance) reiterate values passed from generation to generation. For fear and prejudice to prevail — or to be extinguished — as the lyrics of Rogers and Hammerstein remind us (controversial in 1949), “You’ve got to be carefully taught.”

Wheeler prefers to teach a way out of these prejudices. She has devoted her life to education and to her alma mater — to how and what we learn — that fundamental process that shapes us and defines what our world will be. All of Wheeler’s experiences, her perspective, her cogent analysis of racism and the open invitation to her students to dig deep, inform her teaching and the program she directs.

Transylvania is esteemed for its teaching and for the teachers it produces. The education program that Wheeler directs develops educators who are steeped in the subject matter of their fields, experts in methodology, brimming with inspiration to help their students and, for some, already thinking about ways to effect change at the policy level. That combination of preparedness is unique. Added to it is a determination and ability to engage, respect and nurture students from every background.

“Our program is focused on developing teachers as public intellectuals in their institutions and communities who truly care about their students,” Wheeler explains, “and not in a superficial sense. It’s understanding the socio-political and the socio-cultural influences in their lives and how that impacts their experiences in school.”

Future teachers are trained to learn about the cultures represented in the classroom and to build a more inclusive curriculum that reflects the students, making learning more relevant to them. Wheeler recalls a time teaching at another university, and the surprise of a classroom teacher who was asked by a fourth grade student, “Why do you have books that only have white people?” Wheeler recounts how the young teacher had never thought about it; she’d simply chosen books based on her own culture. “It took a student to say, ‘Hey, you don’t have any books that reflect me.’”

Transy’s future teachers prepare to address complex issues — poverty, equality and racism — in the classroom, says Wheeler, “in ways that make sense and are developmentally appropriate.” And they are asked to expand their sightlines beyond pedagogy: “How can you be an advocate for children who are marginalized because of social status and inequality and racism? How do you deal with that as an institution?”

So, how does Transy’s program accomplish this?

“It is a liberal arts program, first of all,” Wheeler says. “Basically our program has a deep theoretical grounding in all of our courses, so our students learn about education foundations, history and philosophy. They understand that teaching is more than just a technical enterprise.” Part of what makes Transy’s program different from others, she adds, is that students are learning how to think critically; they’re developing their analytical, writing and problem-solving skills.

“Ultimately,” she reflects, “what makes our program different is that we do entertain those big liberal arts questions about what it means to be human. And we learn about the human condition through the lens of education.”

Some of this essential work happens around the seminar table, with majors and nonmajors gathering around an intimate, challenging and almost sacred space that Transy grads know so well. That intimacy and openness is what first drew Wheeler to Transy as a Thomas Jefferson scholar (the equivalent of today’s William T. Young scholar) in 1986.

It’s in this space that Wheeler prepares her classes to do the hard work of dissecting beliefs and preconceptions, naming and tackling the uncomfortable realities that social mores would have us omit from public discourse. Doing so requires taking time at the beginning of the semester to build community and establish guidelines for a safe, respectful environment. Students have the freedom to express their perspectives as long as they can support their ideas with credible evidence.

“Sometimes I do community-building activities in which they reflect on their families, what generation they represent in the United States. They do activities where they talk about respect: What does it mean to get respect; what does it mean to give it; does respect look the same in all cultures?” In the end, she says, “we try to find commonalities but also look at our differences in a way that’s not negative or pejorative.” By implementing this process, Race, Ethnicity, and Social Class in American Education has gone from being Wheeler’s most difficult experience to the class she most enjoys teaching.

“We talk about white privilege; we talk about racism and inequalities. Those are the themes of the course and are difficult topics for students to talk about. And we actually name those things,” she says, noting the importance of doing so. Citing sociologist Allan Johnson, Wheeler reminds her students that “we can’t address these problems if we don’t name them — naming them as they are, if they’re white supremacy or patriarchy or anti-Semitism.”

She describes how the class unfolds by creating an environment “where they can trust and build trust and share ideas, even though they may not completely agree with each other; there’s a space where they can feel safe doing so.” That sense of community is cultivated throughout the semester as they delve into the scholarship, talking about issues of whiteness and white privilege and how they affect daily life.

She challenges her students to think structurally, to understand that racism is much more than a matter of individual behavior. It’s a “systemic problem,” she explains. It permeates everything. “I really want them to understand institutional and systemic racism and other forms of oppression.”

To get there requires being open and honest. Listening, Wheeler reflects, is at the heart of the process. The quality of listening, “the act of really listening, of holding the space for each other in the sense that you’re not trying to fix somebody — you’re interacting with them. You’re trying to figure out who they are at their core and what makes them who they are.” She sees it as an expression of respect and love.

Wheeler’s love of Transy, her students and their infinite capacity for learning fuels her commitment to her alma mater and her faith in what the institution can still become. She recalls being one of only a few Black students on campus in 1986, developing her activism as well as her academics, working to raise consciousness, expending the extraordinary energy that being Black in a white world demands.

She remembers the lasting friendships, the close connections with faculty, their ability to pique her intellectual curiosity, particularly the influence of her own professor of education, Carol Spotts, who provided the mentorship and inspiration to follow her love of learning into a lifetime of teaching.

“We always joked,” Wheeler recalls. “She would say, ‘One day I want you to take my spot.’ And she has, as a professor of education and as the only full-time tenured Black professor.

Wheeler believes in Transylvania and its ability to become more inclusive. She’s intent on being part of that effort — on campus and out in the world — rallying the will and commitment just as Transy prepared her to do. She’s sharing the singular Transy experience with her students, who will then take their knowledge, always evolving, open and listening, into their communities.