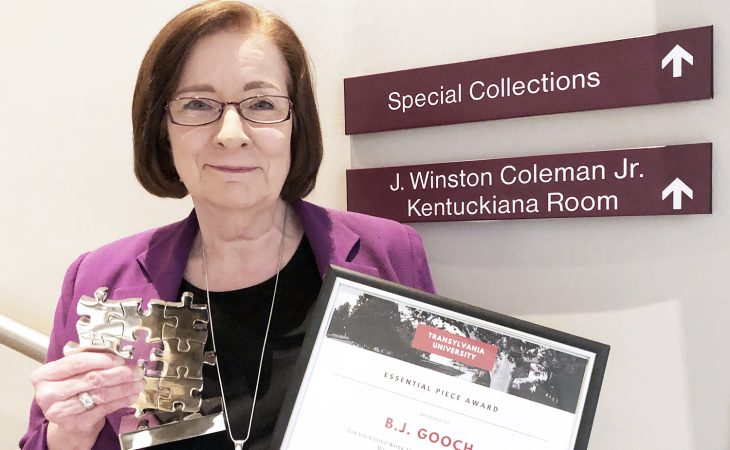 To have books so rare and valuable in your care as John James Audubon’s “Birds of America” double elephant folio and an illuminated manuscript specially made for a king 500 years ago, you naturally want to protect them.

Preservation certainly was a goal for BJ Gooch during her 26 years as Transylvania University’s Special Collections librarian and university archivist, but she never wanted to turn her department into a museum.

Sitting in her second floor office in Transylvania’s J. Douglas Gay Jr./Frances Carrick Thomas Library on the last day before her retirement earlier this week, Gooch reflected on this fine line in the world of special collections: How do you protect the publications, letters, photographs, etc., while letting people use them? “I’ve always wanted to err on the side of providing access to collections if I could,” she said.

Throughout her career — which began more than three decades ago at the University of Kentucky’s Special Collections Research Center — what she’s found most gratifying is connecting professional researchers from across the globe, as well as Transylvania faculty and students, with vital pieces of history.

“I’ve always viewed this area up here more as a research library than as a museum,” Gooch said. “A lot of my time here has been trying to increase access to collections. I think what I most liked about my job is helping people.”

The more she connects researchers with the collections, the more the university’s documents and photos show up in books about Lexington and Kentucky history. “That’s some of the best PR you can have,” Gooch said.

Transylvania’s Special Collections got quite a bit of attention after a group of young men, posing as researchers, tied Gooch up in the Rare Book Room, stole publications, manuscripts and drawings, and then unsuccessfully tried to sell them before getting caught.

Because the 2004 heist was so traumatic, Gooch didn’t want to talk publicly about it — that is, until she was interviewed for an appearance in the film “American Animals,” which was released two years ago.

“The movie ended up being cathartic for me,” she said.

She felt good about the approach the moviemakers took. In fact, director Bart Layton flew to Lexington from London to give her a personal screening before it was released — to make sure she was fine with how she’s portrayed.

At first, she underestimated the significance of her role in the film. “I said Bart, I do realize the movie is not about me really; it’s about why these guys did this.” She said he told her no, what they did to her is the moral line that’s so important to the story. She was the line they were willing to cross.

Gooch — who also was recently interviewed for a six-part podcast called “Heist with Michael Caine” — said she was through with having the robbery affect her life so much when she agreed to be in the film. “I decided this would be my chance to express myself about what happened, and it helped — it helped a lot.”

While the robbery highlighted a dark side of human nature, Transylvania’s Special Collections has benefited from the kindness of others.

For instance, after visiting the Rare Book Room, the late Clay Hancock took such an interest in the Audubon folio she donated money for Transylvania to catalogue “Birds of America” and the rest of the items in the library’s Clara Peck Collection, which focuses on natural history and horses (the Hancock family owns the renowned Claiborne horse farm).

This cataloging goes back to access. “A lot of people don’t realize what it means when something isn’t cataloged,” Gooch said. “You don’t know what’s there.”

Additionally, a large and ongoing digitizing effort is connecting people with the collections. Used to be, when somebody asked for a photograph, Gooch had to dig through boxes of images and go to a photo lab to have prints made — and then mail them off. The digitization initiative has become such a big deal the library added a digitization and metadata specialist to help with the task. A current priority is university-related items, such as old copies of The Rambler student newspaper and yearbooks. (See what’s online so far.)

Student workers are assisting with the digitization effort as well. Actually, they are part of what Gooch liked best about working at Transylvania. “I’ve really met some wonderful young people and become friends with them,” she said.

While the Special Collections are adapting to the electronic age, paper and vellum still hold power over visitors. This was evident when a group of high school students saw the actual letters Transylvania President Horace Holley wrote about visiting Thomas Jefferson at Monticello, describing dinner and what Jefferson looked like in great detail. Gooch said she remembers wondering if in this day and age youths could still be impressed by handwritten letters. “They were thoroughly impressed.”

Looking toward life in retirement, Gooch said she doesn’t have any definite plans, especially with all the uncertainty surrounding the pandemic. For sure though, she’ll continue to pursue her loves of literature, sports and music (her dream job is creating soundtracks for movies).

Wherever life takes her, she’ll be missed at the university. “We are sad to lose BJ, but happy for her,” Director of the Library Susan Brown said. “Transylvania is losing a huge amount of professional expertise and knowledge about the college and the collections as she retires. She has helped so many of our student and faculty researchers to succeed in their studies, as well as aided researchers from all over the world. She’s also been a great colleague.”