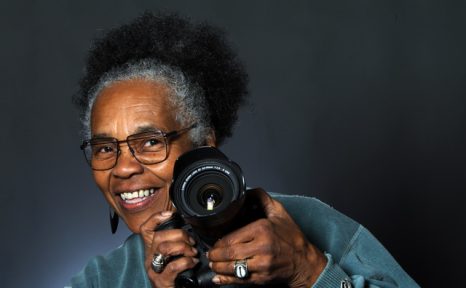 We’re surrounded by digital photos these days. Can we trust what we’re seeing?

Sharon Farmer, the first African American and woman to become director of the White House Photo Office, answers with an emphatic “no” — not unless you can trust whoever’s sharing it.

Farmer is one of four nationally renowned photojournalists participating in the “Through the Lens: Campaign Photography in a Digital World,” discussion on Sept. 23 hosted by Transylvania University and Kentucky Humanities. As part of the school’s New Frontiers series, the event will examine the role visuals play in campaigns and whether digital imagery serves as a reliable source of information.

In addition to Farmer, the virtual panel will include Ryan Morris, Paul Morse and Chris Usher — also award-winning photojournalists who spent years in and around the White House and national political campaigns. The event will be moderated by Jennifer Palumbo, a local journalist and adviser to Transylvania’s student newspaper, The Rambler.

On a Think Humanities Podcast released Wednesday, Farmer shares stories on her experience covering the Clinton presidency with Bill Goodman, an Transylvania adjunct journalism professor and executive director of Kentucky Humanities. They also touch on issues related to the Sept. 23 panel.

“Digital imagery is not to be trusted, except based on the people who put it out there,” Farmer said in the podcast, noting how photos can be altered to make crowds look bigger, for instance. “I totally am opposed to manipulation,” she continued, adding that all she does to a photo is adjust the lighting — she doesn’t even crop anymore on a computer (she does that in the viewfinder when she’s taking a picture).

The photographers in “Through the Lens” are also part “Fact/itious,” the first exhibition of the year in Transylvania’s Morlan Gallery. The exhibition will be hosted online through Oct. 9. Additionally, they will connect with Transylvania students and faculty virtually to discuss their careers and photography.

Democracy and the Informed Citizen is administered by the Federation of State Humanities Councils. It deepens the public’s knowledge and appreciation of the vital connections between democracy, the humanities, journalism and an informed citizenry. The series, including “Through the Lens,” is also funded by the Andrew W. Mellon Foundation and the National Endowment for the Humanities.

Meet the ‘Through the Lens’ panelists

Sharon Farmer has been a professional photojournalist and exhibition photographer for more than 40 years, shooting news stories, political campaigns, cultural events, conferences and portraits. Most notably, she was the first African-American woman to be hired as a White House photographer, as well as the first African American and woman to become director of the White House Photo Office. She documented the beginning of the Clinton-Gore Administration.

Formerly an assignment editor for the Associated Press, she was part of the AP team in 2003 that covered the Super Bowl in San Diego. She was also the campaign photographer for Sen. John Kerry’s presidential campaign in 2004. Over the years she has photographed for The Washington Post, Smithsonian Institution, American Association for the Advancement of Science, Leadership Conference on Civil and Human Rights, National Urban League, Brookings Institution, and Delta Sigma Theta Sorority Inc. to name a few.

Ryan Morris is an independent photographer and multimedia storyteller based in Lexington, Kentucky. He has taken photos in over 30 countries and speaks Russian.

Paul Morse’s talent and unique style have earned him the trust of presidents, world leaders and Fortune 50 companies. A consummate visual storyteller, his ability to capture emotions with power and beauty has allowed him to become a highly sought-after photographer throughout the U.S.

Following a successful photojournalism career at the Los Angeles Times, Morse served as a White House photographer, documenting the lives of President George W. Bush and his family. From his experience at the White House, he has gained the trust of additional presidents and their families, documenting President Obama’s inaugurations and serving as a lead photographer for the Clinton Global Initiative.

Chris Usher spent several years as a newspaper photographer before going freelance and moving to Washington, D.C., in 1990.

His photojournalism work appeared regularly in domestic and international publications for more than three decades, and he is the recipient of numerous domestic and international awards, including an Eisenstaedt Award for his unique and controversial depiction of President Clinton’s post-acquittal speech. In 2005, Usher’s “Behind the Velvet Rope,” a collection of behind-the-scenes images shot with a Leica while covering the president of the United States, became a traveling exhibition and book. In 2008, he self-published “One of Us” from his documentation of Hurricane Katrina and its aftermath. The project exhibit opened at the Corcoran Gallery of Art in Washington, D.C., in 2008. Since 2009, he has been the still photographer for CBS’ “Face the Nation.”

Event moderator Jennifer Palumbo is starting her second year as faculty adviser for The Rambler, Transy’s student-run newspaper. She has nearly 30 years experience in TV news, which includes the ABC News London bureau, WYMT-TV in Hazard and WKYT and FOX 56 in Lexington. For the past year, Palumbo has been an anchor at LEX 18, and she is involved with charities including the Ronald McDonald House, American Heart Association, Jarrett’s Joy Cart and OperaLex.