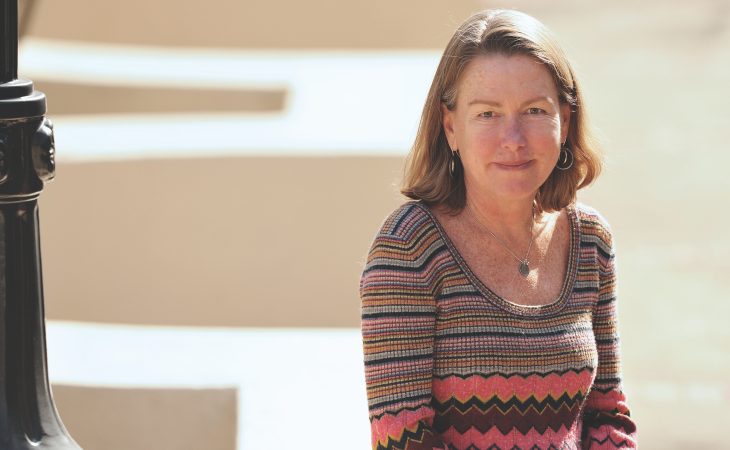 For nearly 50 years, Martha Billips has been as much a part of Transylvania University’s evolution as the school has been integral to her personal and professional growth. She’s experienced and influenced the institution as a student, professor, scholar and administrator, but also as a first generation college student, a working parent and committed colleague.

Perhaps that accounts for her ability to articulate Transylvania’s value and consistent trajectory, its sense of community, opportunity and drive to examine preconceptions.

“Transy was transformational for me,” she says, recalling her arrival on campus from Pikeville, Ky., during the culturally fomenting mid-1970s. She’d been too young to participate in the social upheaval, she remembers, but able to experience the changes happening. At Transy, she was challenged to think deeply about the developing socio-political issues and to consider them in the context of multiple perspectives.

She found the study of gender and the second wave of feminism especially relevant. Its impact can be seen throughout her professional scholarship, including her focus on Edith Wharton and Kentucky writer Harriette Simpson Arnow. For Billips’s generation, women were new to many areas of the workforce; examples were sparse. She’d never considered a Ph.D. before coming to Transy, nor the idea that she could be a professor.

“Challenge” was the operative word in her experience of Transy and continues to be. It’s “the willingness to be confronted,” she says, and to question what is already known. “Transy always pushes you to think and examine, and to consider a variety of views.” Often, she would quote Socrates to remind her students that “the unexamined life is not worth living.”

That readiness to push, to accept being uncomfortable, to eschew intellectual complacency, as Billips describes the dynamic, provides the constructive momentum for an open mind. It has infused every facet of her Transy life, from her time as a student, to professor of English and associate dean, to the summer book club and soon, as she happily anticipates, the casual gatherings with other retired faculty.

“I grew up in Eastern Kentucky, never expecting that my colleagues would include people from Eastern Europe, Kenya, China, Peru and other parts of the world” or that the entire community would offer such a variety of mindsets and backgrounds. Nor did she know that she would ultimately become a scholar of Appalachian literature. She’s found it to be a creative, interdisciplinary and fulfilling field of scholarship that is entwined with activism. She has been deeply involved in the Appalachian Studies Association, presenting research and serving on the editorial board of the organization’s official publication.

Billips is quick to point out how much she has learned from students, too. She counts among the “most gratifying” teaching of her career as the period after she served as associate dean from 2016-19. When faced with the choice of continuing as an administrator or returning to the classroom, the latter held sway. She’s found immense satisfaction in helping to meet the changing needs of incoming students.

For 20 years Billips directed the first-year experience at Transy, working with colleagues to build the pedagogy and a core experience that would at once introduce Transylvania’s academic expectations and meet the disparate academic needs of students new to campus. She points to the multi-disciplinary approach that engages faculty and students from every subject area, and the lasting connections and impact on the overall academic experience.

As she enters the next leg of her journey, ready to enjoy the pure pleasure of reading without the necessity of underlining passages for future teaching, Billips is happy to observe Transylvania’s continuing promise. She sees it in the new leadership’s commitment to students and to the university, in the remarkable changes to the physical campus, and above all else, she says, in the “intrinsic nature, the consistent spirit of the place — of community and inquisitiveness, and being able to push the limits.”

It’s “the willingness through the years to change,” she adds, “to recognize the necessity of certain changes — embracing a more diverse student body in different ways, becoming test optional and increasing the commitment to giving first-year students what they need to succeed.” In all of these and their successful results, she concludes, “I really see that commitment to students to reach their potential. I hope I helped contribute to that.”