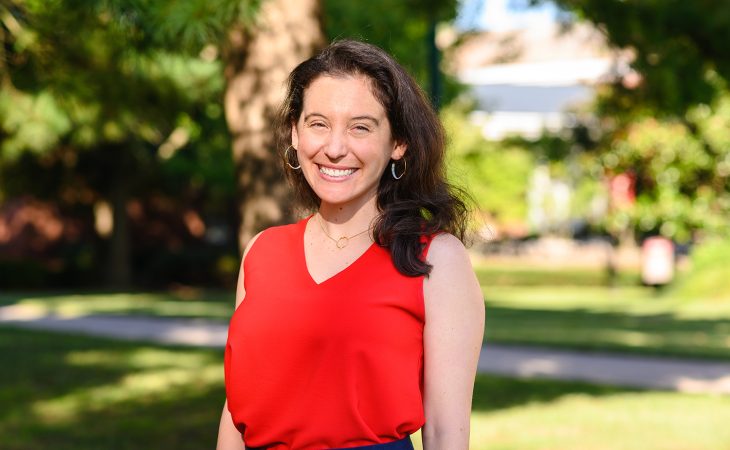 Leslie Ribovich, a religion professor at Transylvania University, is one of 10 academics and writers from across the nation selected to participate in the Young Scholars in American Religion program.

Over the course of two years, Ribovich will attend seminars and work with mentors who are renowned in their field. It’s not only a career development opportunity for her, but also a chance to expand offerings for Transylvania students.

“For the religion program and Transy, this is a fantastic opportunity for course and curriculum development,” Ribovich said. She plans to expand her Judaeo-Christian Heritage course into two or three classes so Transy students can learn more deeply about the histories of Judaism, Christianity and American interfaith politics. “Additionally, I would love to build my May term 2021 course, Hamilton and American Memory, into a full-semester course.”

Also during her time in the 2020-22 Young Scholars in American Religion program, Ribovich will continue working on her book project, “Without a Prayer: Race and the Transformation of Religion in American Public Education,” along with an article combining her background in writing studies and the study of religion.

Ribovich said she’s heard wonderful things about the collaborative and collegial experience the Young Scholars in American Religion program has offered over the past 25 years. “It is an amazing opportunity to work with a cohort of peers and mentors who study American religions from diverse disciplinary perspectives. We will meet for a series of seminars to talk about teaching, research and professional development — these seminars help us toward the end goal of producing two course syllabi and a publishable journal article or book chapter.”

Before joining Transylvania at the beginning of this past academic year, Ribovich earned her Ph.D. and M.A. in religion in the Americas from Princeton University. She also has a B.A. in religion and English from Barnard College, the women’s liberal arts college of Columbia University. At Fordham University and Princeton, she was an instructor in various courses, including American Religious Texts and Traditions. Additionally, she was founder and coordinator of Princeton’s “The Ethics and Politics of Ethnography Series,” now called “The Interdisciplinary Ethnography Series.”

Ribovich is a scholar of religion, race and education, with a focus on the 20th century United States, according to her bio. “Her research and teaching explore facets of American life, such as public schools and prisons — areas that are not normally considered religious.” She focuses on the “underlying moral assumptions in those settings and their implications in American culture and history.”