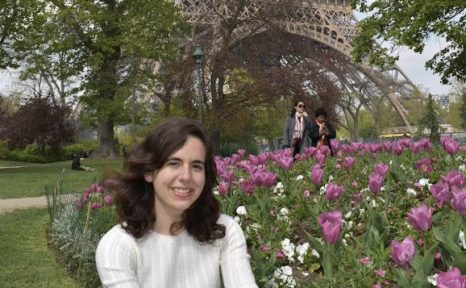 International travel might be a long way from people’s minds right now, but we shouldn’t lose sight of its value for students.

As Transylvania University professor Simonetta Cochis reminds us: “Employers seek applicants who are global citizens, who possess both linguistic and cultural capital in their background.”

She and her French department colleague professor Brian Arganbright recently released a report on the benefits of the school’s Cardwell Scholarship, which provides the funds for students to study in a French-speaking country.

The report featured stories of scholarship recipients including Kira Bruno, who came to Transylvania with exceptional French skills but little confidence in speaking it. The graduating senior now not only speaks the language with confidence, but she also plans to move to France as a teaching assistant through the Lexington Sister Cities program — “to help others find their voices.”

With funding from the Cardwell Scholarship, Bruno spent her winter 2019 term in Normandy at the Université de Caën. Speaking the language every day, both inside and outside of the classroom, “truly made French a part of me in a way that it hadn’t been before and showed me that I could rely on myself and have greater confidence in my abilities,” she said.

Established 2013, the Douglas and Marilyn Cardwell French Scholarship Fund was endowed by the 1961 graduates it is named after. “Douglas and Marilyn Cardwell know that cultural and linguistic competencies take time to develop, and that living for an extended period abroad heightens awareness, develops character and self-reliance, and shapes individuals in multiple ways,” Cochis continued.

The professors’ report included examples of how the scholarship has helped other students, such as senior Diaka Savané. While in France, she spoke as little English as possible and built relationships with her host parents and relatives who’d emigrated to the suburbs of Paris. The experience helped her better appreciate the “profound significance of their shared language.”

Savané’s time abroad has helped shape her career path. “Her experiences gave her the impetus to envisage a future for herself in the Peace Corps, to work towards social justice and better lives for the disadvantaged.”

Also featured is junior Aissata Sackho, whose experience in France was formative, helping her move toward her goals in social justice and women’s rights in Africa, Cochis said. Sackho also worked on a faculty-directed research project in Senegal with professor Arganbright — which led to her presenting a paper at the Association of American Colleges & Universities Conference on Global Citizenship.

The report also considers the overall impact of the Cardwells’ generosity: “The French Program at Transylvania has been on a steady path of growth, and with the Douglas and Marilyn Cardwell French Scholarship Fund, it is well positioned to continue to thrive while raising the standards of a 21st-century liberal arts education.”