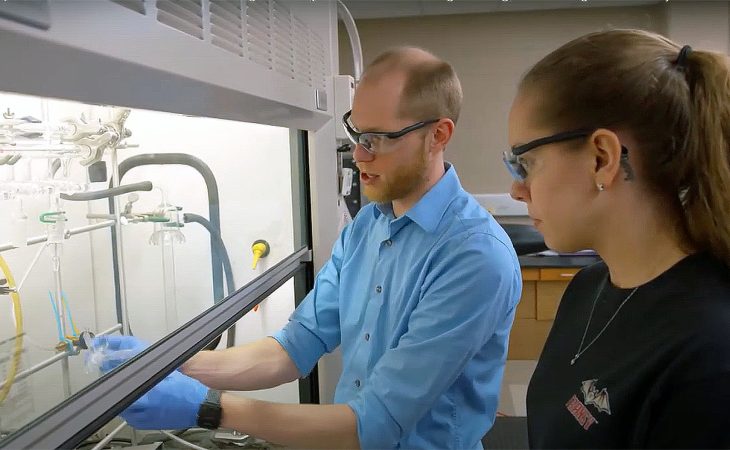 As Kentucky NSF EPSCoR research pushes the boundaries of advanced manufacturing in the Commonwealth and beyond, it’s vital that the materials used to create sensors and electronic components are flexible, cost-effective and more sustainable.

Chemistry professor Kyle Schnitzenbaumer is working on materials that do just that. His research centers on understanding the structure-property relationships of colloidal semiconductor nanocrystals.

“Nanocrystal is a very small piece of crystalline material … we’re talking about crystals that are on the order of 1-10 nanometers in size, much thinner even than a human hair,” Schnitzenbaumer explained. “Nanocrystals are sometimes referred to as artificial atoms. They can sometimes be viewed as — kind of like atoms are the building blocks of materials, these nanocrystals have potential to be used as sort of building blocks of arrays of these nanomaterials.”

A recipient of one of Kentucky NSF EPSCoR’s annual research awards, Schitzenbaumer’s project has two facets — one is committed to advancing nanocrystal research for the benefit of device engineering and manufacturing — the other is committed to enhancing the scientific literacy of the Lexington community.

“The goal of my research is to gather information about these materials and how we make them that can then be used by the engineers or the applied scientists that are actually going to go manufacture the devices. Once that work has been done and once that foundation has been laid, that allows other researchers to streamline their efforts because they’re not having to go in and characterize the things that they make to the same extent,” he said.

Through the grant, Schnitzenbaumer is also working to connect art and science in public spaces with the goal of benefiting scientific literacy. The professor, colleagues and students will use spectrometers to capture optical spectra and generate accompanying audio to create an experiential art installation. Schnitzenbaumer believes interdisciplinary collaboration like this is vital for solving complex problems in our world.

“At a liberal arts institution like Transylvania, this collaboration is celebrated. We’re particularly well positioned for projects like this where we’re trying to incorporate input from some different disciplines and sometimes disciplines that are often viewed as being very different from each other,” he explained. “But that’s one of the hallmarks of how we approach things, and I think that’s how we as a society will actually be able to address the challenge of the future is taking interdisciplinary approaches.”

Schnitzenbaumer is one of two Transylvania professors who received part of a National Science Foundation grant to help boost Kentucky’s research and manufacturing capabilities. Physics professor Stephen Johnson also received funding to collaborate with a student over five summers to measure optical properties of advanced materials — such as those used in solar cells — that University of Kentucky research partners will design for manufacturing systems. Using equipment already installed in a Brown Science Center lab, they will study properties of these materials with colored laser beams in a procedure called photothermal deflection spectroscopy.