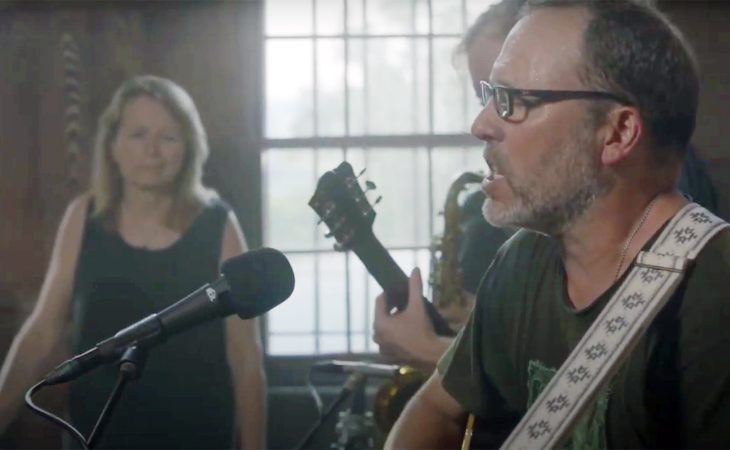 This article by English professor Maurice Manning is part of a series by the Transylvania community on the theme of our academic year: Resilience. As we face the biggest public health crisis in a generation, we’re digging deep to find what it takes to bounce back, to face adversity with both grit and kindness.

In my years of teaching poetry I’ve suggested that my students ought to have two arts — one to study and deeply learn, and another one for the sheer fun of being creative. While I have chosen poetry as my first art, my second art has always been music.

My music, such as it is, usually consists of playing guitar and sometimes banjo, and singing. I like to play old folk songs, bluegrass tunes, blues and ballads. I’ve tried to get pretty good at finger-picking a guitar, because I like the challenge and I like a snappy rhythm.

I also love the content of songs, songs that mourn leaving home or losing someone dear, songs that relish freedom, songs that recognize the value of a place. But I have never aspired to write songs of my own; instead, the far greater pleasure has been playing and singing songs that someone else wrote, often songs that have changed and varied through the years. Such music, while it may originate with one individual, eventually becomes communal, a voice we have in common, filled with the feelings we all experience and struggle through.

Perhaps that’s one appeal I’m drawn to, because I’ve learned we’re in this life together, no matter what. But I also like a good tune and a good song that leaves me thinking and feeling well after the last note is played.

One of my favorite songwriters is John Prine, who died last week as a result of complications from the novel coronavirus. He was 73. One of his signature songs is “Paradise,” an understated title if there ever was one.

It begins, “When I was a child my family would travel, down to western Kentucky where my parents were born, and there’s a backwards old town so often remembered, so many times my memories are worn.” The chorus goes on to lament that Paradise is no more because “Mr. Peabody’s coal train has hauled it away,” a moral clash Prine put his finger on when he recorded the song, back in 1971.

Later in “Paradise,” one of the verses goes like this: “Then coal company came with the world’s largest shovel, and they tortured the timber and stripped all they land. Well they dug for their coal till the land was forsaken, and wrote it all down as the progress of man.”

While one may view this song as a protest against environmental carnage, I think in its quiet way, the song gives voice to a fundamental human predicament: We can never escape the irony of our actions. The world’s largest steam shovel mentioned in the song was real. It had to be transported piece by piece on rail and was assembled on-site in Muhlenberg County, Kentucky.

It was 20 stories tall. The boom of the shovel could reach out the length of a city block, and the bucket could scoop a football field of earth at a time. Eventually, of course, the steam shovel was no longer feasible to operate. So the engineers and coal company executives decided the shovel would dig its own grave and bury itself. And that’s just what happened.

During the heyday of the steam shovel’s career my mother and great-grandmother drove me over to western Kentucky to have a look. I must have been four years old. Prine wrote the song about the same time.

Another Prine song, “Sweet Revenge,” begins: “I got kicked off of Noah’s ark, turned my cheek to unkind remarks, there was two of everything and one of me.” His songs are about people, people who have suffered, people who are lonely, people who have lost someone, people who have come home wounded from war and cannot belong to their country anymore.

But Prine also found humor in the human experience, and in particular the American experience of being human. I’ve realized during this worldwide crisis that all living things are profoundly vulnerable — that is one condition of being alive.

But all living things, including humans, are also profoundly resilient. No songwriter I can think of better captured that paradoxical reality than John Prine.

Although I have mourned the loss of this good man and musical craftsman, I have sure been glad to listen to his music. His songs, moving and sad as they can be, are also consoling. That must be one of the reasons we have music, and why we enjoy sitting around with a guitar and picking out a few tunes, and singing along.

Over Memorial Day weekend back in 2019 a friend of mine who’s a tremendous slide-guitar player, Reed Turchi, invited some of his friends to join him and record an album. We made the recording in a bourbon warehouse at the Willett Distillery, near Bardstown.

The object was to make a live recording of traditional and old Gospel tunes. We had a dobro player, two guitars, a sax player and a keyboardist. Reed’s wife Kathleen and his mother Laura sang backup harmonies and Laura also played viola on a few songs. Reed’s father, Pete, took photos.

It was an occasion of great fellowship, and we had a purpose: to get the songs right, to put our talents together and make a joyful sound. The result is Reed’s album, “Angel’s Share.” In addition to the musical recording, the sessions were recorded on digital video.

Near the end of that Memorial Day, we realized we needed another song. Reed scratched his head and said, “How about ‘Angel from Montgomery,’” one of John Prine’s finest mournful songs. It was the last song we recorded and seemed to be exactly the right song to conclude our time together.

The evening Mr. Prine died Reed emailed me a video of all of us playing “Angel From Montgomery,” nearly a year ago, back when this great American troubadour was very much alive, probably playing somewhere himself bringing joy to his fellow human beings. The chorus goes:

Make me an angel, that flies from Montgomery,
make me a poster of an old rodeo.
Just give me one thing I can hold onto,
to believe in this living is a hard way to go.

Reed has kindly shared this video with all of our community. And that’s one thing we can do right now — we can share, our talents, our time and our common spirit.

About the author: Maurice Manning, a Transylvania English professor and writer-in-residence, has published multiple books of poetry, including “The Common Man,” which was one of three finalists for the 2011 Pulitzer Prize in Poetry. His first collection, “Lawrence Booth’s Book of Visions,” was selected for the 2000 Yale Series of Younger Poets. He has had works in publications including The New Yorker, Washington Square, The Southern Review, Poetry, Shenandoah and The Virginia Quarterly Review.