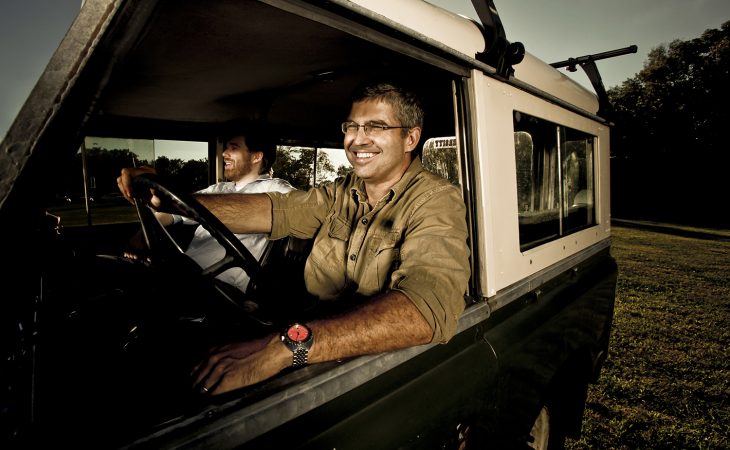 This article by anthropology professor Chris Begley is part of a series by the Transylvania community on the theme of our academic year: Resilience. As we face the biggest public health crisis in a generation, we’re digging deep to find what it takes to bounce back, to face adversity with both grit and kindness.

I sat on a yellow toolbox in an ancient archaeological site, now covered by jungle. Mariano lived in a nearby village and worked with me on excavations in the Honduran rain forest. These were his ancestors.

We talked about how the iconography on the pottery changed over time. He rubbed the incised decoration on the piece he held, and then tossed it back in the artifact bag. “But we don’t know anybody’s name,” he said, looking down. “We don’t even know what language they spoke.” He stood up and made himself busy. What do we really know, then? He never said that in so many words, but I understood.

We know a lot, I might have argued. We know about trade routes, about relationships with neighbors. We know what strategies leaders used to gain and maintain power. And we know the iconography on the pottery changed over time. I understood what Mariano was feeling, though. I felt it, too. The difficulty in learning about the lives of people in a society that no longer exists frustrates archaeologists. These folks once lived in big villages. They created all kinds of spectacular artifacts. Suddenly, it seems, all of that ended. The connection between then and now is hard to see. If only there was some continuity, if not everything had changed, we might know them better.

Archaeologists used to talk about “collapses” — things falling apart. In that, however, there is an implicit suggestion of failure. They collapsed; they did not make it. This is a convenient way to envision the past. Nobody needs take responsibility. As colonizers, we can absolve ourselves of blame for whatever happened. They were not going to make it anyway.

Most of us now see the dangerous implications in that rhetoric, so we changed the discourse, and our vocabulary. Resilience, not collapse, has been our term for a while now. Rather than focus on what ended, we emphasize what endured. These societies did not fail; they transformed, and that transformation can be good. Perhaps the societies that created the spectacular artifacts did not create an equally spectacular quality of life for its people. We study these changes, and we look for the reasons.

Now, we find ourselves in the midst of a pandemic, transforming. We see semblances of normality in some things, but most everything is unprecedented. It is disconcerting in its stillness. Everything is changing, but not moving. That seems impossible. Can that possibly be how transformation happens? Change comes as we remove energy from the system, forcing an ersatz boycott of most everything.

Again, we talk about resilience. We will get through this, together. We will survive, and return to normal.

Unlike in the rhetoric archaeologists have chosen, however, “resilience” can be a problematic term right now. Certainly, resilience in the sense of “springing back into shape” makes no sense. The old normal involved crisis after crisis (e.g. housing, healthcare, education). We see much bigger problems on the horizon, like the coming climate change catastrophe that will dwarf the present one. The structures and systems generating these crises will collapse, eventually. They are not sustainable, and we knew that. Because these collapses are coming, we should seek some degree of control. Crash landing a plane is better than just crashing. Springing back into shape may be the last thing we want to do.

In some ways, we were already moving there. Attitudes change. Excessive consumption becomes an embarrassment, not an achievement. The expensive house in the elite neighborhood becomes a symbol of the problem, not of success. The middle manager who finally dons the paraphernalia of affluence becomes a sad, selfish figure at best: less generously, an agent of an oppressive system.

Of course, springing back should not be what we mean by resilience in the context of a university. Rather, resilience here means to persevere, rather than succumbing to paralyzing despair. Resilience represents a recovery from the shock of unexpected hardship. We mean hopeful action as opposed to passive resignation.

We must not spring back(wards) into shape. We should spring forward. Everything is momentarily stopped, and we are free of the insurmountable inertia that pushed us in a certain direction. For a brief frozen moment, the currents of history do not propel us; this slack tide allows an opportunity. Imagine what an input of energy can do now. We can go any direction we want.

Back in the jungle, after Mariano got up, I walked over to him. “You’re right. We don’t know their names. But I do know the names of who they became. Mariano.” They were resilient. They did not spring back, but forward. They quit building spectacular, unsustainable things. They built something better.

About the author: Chris Begley ’88 is an anthropology professor, archaeologist, National Geographic Explorer and author of the forthcoming book “The Next Apocalypse: The Art and Science of Survival.”