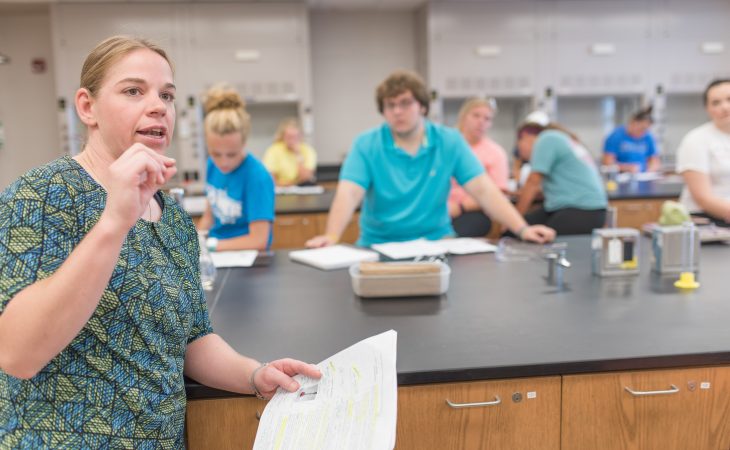 As winter term leaned toward spring break and commencement glimmered on the horizon, chemistry professors Jessie Brown and Kyle Schnitzenbaumer couldn’t have imagined they would be finishing their classes online. Or how quickly that shift would happen.

But with the rapid spread of COVID-19 came the need for immediate action. In a matter of days, the personable, everyone-knows-your-name Transy classrooms, shuttered for spring break, were being reinvented. The entire community leapt into preparations to continue their work remotely — a seemingly alien concept for the relationship-intensive Transylvania community. However, it’s the relationships that have carried them through and made the transition possible.

“They had all these tutorials and open forums that made the logistics smoother,” Brown says, describing the process of gearing up for remote teaching in a matter of a week or so.

“I think, hands down, the thing that made this possible for me, and widely for everybody in general, is the support staff’s Herculean effort,” says Schnitzenbaumer, insisting on the importance of recognizing the people who laid the essential groundwork, particularly the dean’s office and the library. He gratefully acknowledges the multiple meetings he had with Beth Carpenter, the user services and instruction librarian, and her advice on whether an idea was likely to work and the functionality of a platform.

Faculty colleagues have been helpful, too, Schnitzenbaumer adds. Just as he could always rely on the ready proximity of faculty in the Brown Science Center, he’s found them equally reachable by email in Transy’s online community. Both acknowledge the support from the administration, emphasizing the importance of being able to maintain the freedom that faculty members always had to make decisions that were right for their classes.

As Brown and Schnitzenbaumer assessed the technology available to them, and their own comfort level in making the transition, they equally considered the lives of their students and the varying level of resources available to them. They quickly realized the importance of simplicity, continuity and normalcy. These became their guiding principles as they approached answers to questions posed by their new reality.

How could they continue what they’d begun in the classroom? How could they make use of platforms already familiar to students? How would they be flexible in a world that was altering week to week? How would General Chemistry fit into the larger reality of basic survival mode?

“I really tried to keep the equity at the forefront of my mind,” says Brown. “Instead of going for new digital learning tools and multiple, innovative platforms, I wanted to keep it as simple as possible.” She kept some elements asynchronous, so that her lectures, parsed into 15-minute intervals, could be accessed anytime by students who were having difficulty logging in at the scheduled class time. And, with a nod to classroom familiarity, she bought a white board to write on in front of the camera mounted on her computer. The assignments were basically the same, she notes, but she gave students more time to do things.

Schnitzenbaumer agrees, noting that the goal was to carry the successful things forward into this new format without overwhelming the students who were already stressed by the “many individual threads” they had to hold on to as they transitioned to remote learning.

“I try to give the students as much of the same type of experience as if we were in person,” he says. “I know it’s still totally different in many ways, but the more doses of normalcy that I can have, the more comfortable that I am, and that transfers to the students.”

Brown misses the nonverbal cues that are so much a part of teaching. But she recognizes how much easier the process has been for her in contrast to the large classroom scenarios she’s read about in The Chronicle of Higher Education. “Transy really is at an advantage in that regard,” Brown says of the small classes and the relationships that are already in place. “Even through this artificial interface, I know who the person is, and I can anticipate what that student may need.” She can recognize them by their voices.

As students were coming back from spring break, Schnitzenbaumer let them know, through email, that they were in this together. “The thing is,” he told them, “we’re all going through something that’s dramatically new for us. And in many ways that puts us on the same level.”

Although the professors miss the ongoing, informal interactions of students walking down the halls, as well as the “small teachable moments” as students make unscheduled stops by their offices, the professors are doing their best to maintain these relationships through virtual office hours. And by letting everyone feel part of the process from the very beginning.

He reminded them of the value of the science they were studying and its relevance to the current challenges. “I’m a scientifically informed person trying to make sense of this new world, just like you are,” he explained. “I think there are a lot of ways that we think about things in chemistry that will apply. You have some data to make a good, informed decision. There are things you know and things you don’t know and how you deal with uncertainty.”

It’s the vivid relevance that makes him wish for those ongoing, in-person conversations. “Now we have all this stuff that is super important for society,” he notes, including the chemistry involved in the need to wash hands with soap. “The way we normally communicate has been taken from us,” he says, intent on finding other means to continue the conversation.

And the process of doing so, he insists, like so many during this challenging period, “is a team effort. Right now it’s nearly impossible not to see that we are all in it together.”