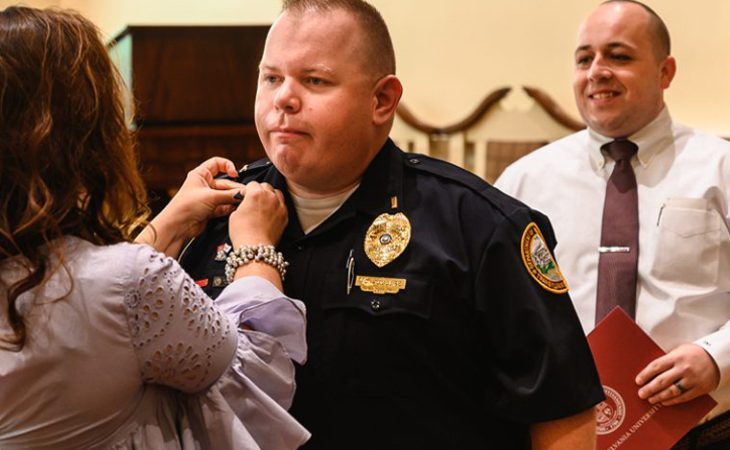 Joseph Casey McClure will bring a passion for community building to his new role as director of Transylvania University’s Department of Public Safety, which he starts Wednesday.

McClure, who earned his lieutenant bars last year, joined the force in 2017 — and since then, whether it’s been working to expand the university’s Adopt a Dorm program or engaging with youths from surrounding neighborhoods, he’s been strengthening the bonds between DPS and those it serves.

“I really want to humanize the officer in the uniform,” he said. “I don’t want people to just see us as a badge and a gun. I want people to know us by our names.”

In his job, McClure draws from his experience as pastor of Garrard County’s Buena Vista Baptist Church, which he says is very community-minded in its mission. He also was a deputy in Rockcastle County, where he grew up.

“Coming from a small rural community like Rockcastle County, moving my way up through the ranks and getting the opportunity to serve as the chief of a respected department is a very humbling experience,” McClure said.

Considering how he’s becoming DPS director during the COVID-19 pandemic, McClure’s first priority is to encourage and uplift the Transylvania community, including his department of 12 full-time and four part-time officers.

Longer term plans include a rebranding — a building on how DPS is not just about upholding the law but also making meaningful connections. “I really want our department to get back to its roots,” he said. “We’re here to meet more than just the law enforcement needs of the Transy community. I want our officers to be interacting with students in more than just disciplinary settings.”

This will include participating in campus events and fundraisers — and even training exercises that invite the participation of students, faculty and staff, who’ll be able to inside look at what DPS does.

McClure’s extensive education has helped prepare him for leadership in community policing. After becoming the first person in his family to graduate with a four-year college degree, which is in human services and psychology, he went on to earn his master’s in justice administration. He recently was accepted into a Ph.D. program in leadership studies with a concentration in criminal justice at his alma mater, the University of the Cumberlands.

Through his law enforcement education and experience, and through working as a pastor, McClure has learned the value of nurturing connections between people — something he will bring to his job as DPS director. “I want us to be community partners with the Transy campus,” he said.