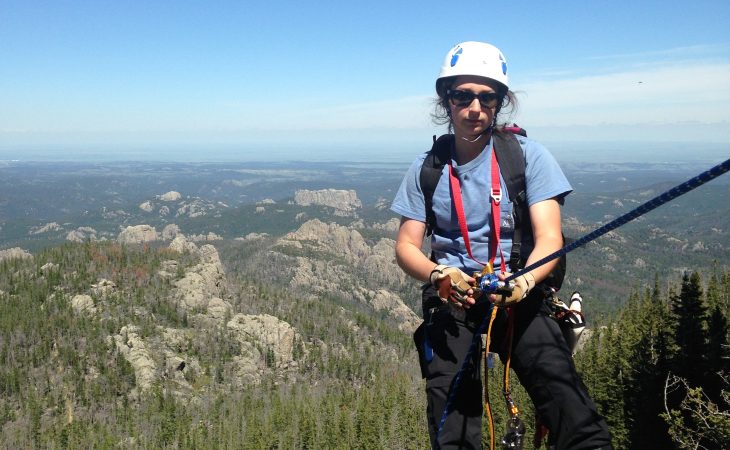 Language is loaded. Changeable. We often take words, labels, classifications for granted. But their meanings and inflections evolve, and their communication reveals layers of cultural experience, diversity and even dissonance. How does that impact the evidence-based world of science?

Kali Mattingly ’14 devotes her days to invasive plants, their genetics, how they spread and their impact on vulnerable plants. After earning a master’s in ecology at the State University of New York College of Environmental Science and Forestry, she joined The Ohio State as a research fellow, working on her Ph.D., teaching and specializing in plant ecology, invasive species and conservation. So it’s interesting that Mattingly would take time away from her field research to investigate the nature of language in scientific literature.

She remembers the seeds being sown by Transy faculty. Sarah Bray ignited her interest in the study of invasive species. Gary Deaton and Scott Whiddon introduced value-laden language and communication in general studies courses that were part of her liberal arts education. Then as a senior she took Hande Ozkan’s Environmental Anthropology class, which brought it all home to her field of study.

“That totally blew my mind,” she says, recalling the epiphany that language in her field of science is loaded, metaphoric and open to misinterpretation. Terms she had taken for granted, such as “invasive,” “nonnative,” “colonizer,” became charged with meanings and contexts she hadn’t considered before. She learned that some people were adamant about “invasive” being a derogatory term to be avoided. Some even went so far as calling invasion scientists “Nazis” because of their efforts to preserve native-grown plants over “alien” ones. The discourse interested Mattingly, even amazed her, but it was not going to alter her course as a future invasion scientist focused on the value of studying invasive species and their impact.

Mattingly’s love of being outdoors and asking questions about nature inspired the Ashland, Kentucky, native to major in biology at Transy and to pursue a life that entwines the two in research. For her dissertation, she spends time in wetlands along rivers, analyzing the changing genomes of purple loosestrife (an invasive plant now banned in some states) and lesser celandine, a yellow buttercup flower that makes tubers that flow downriver. “We’re using genetics to understand how it’s spreading across the landscape,” she explains, excited to be working in a lab that is “thinking about bigger ideas for restoring ecosystems.” For her master’s she analyzed the role of Japanese knotweed in the decline of the endangered Leedy’s roseroot, which grows on cliffs and is vulnerable throughout its range. She demonstrated that by eradicating the invasive, more light could reach the succulent and help it reproduce. The process deepened her understanding of how invasive species undermine ecological diversity.

As Mattingly progressed in her field, her heightened sense of language stayed with her, and the need for clear communication in science became more evident. It led her to stray a bit from her plant research to explore value-laden language. The impetus was a project for a class she was taking on metadata. But the motivation, she explains, was the reality that communication matters intensely in science, not just among scientists, but with the public. It reverberates through policy making, funding and in how the general public understands and responds to important issues.

She co-authored a published article, “Disconnects between Communicated Impact and Ecological Impact of Biological Invasions,” which analyzes data from studies by authors from 26 countries, looking at their use of terminology and, particularly, the connection between invasive and impact. “There’s a big camp that says we should only say ‘invasive’ when a species has a strong negative impact on the environment,” she notes. This includes policymakers and the general public, whose focus tends toward impact when thinking about invasive species. “So, that’s what we wanted to test.”

The study found that scientists don’t reserve “invasive” and other value-laden terms only for cases of strong negative impacts — they have a broader understanding and use of “invasive.” Instead, contextual factors determined differences in language use. Among the results was evidence that researchers in developing countries use more neutral terminology than the more aggressive language in developed nations; and overall, language has become more value-laden in recent years.

“We don’t want our science to be miscommunicated and we also don’t want to make assumptions; we just want to be clear about what we mean and what we found.”

This matters, Mattingly says, because “it seems like a problem if scientists and other stakeholders are all saying the same words but understanding them differently. I guess that’s the definition of jargon. And jargon, miscommunication, misunderstanding must feed mistrust of scientists, which is a huge issue, with climate change denial as one example.”

She adds, “We don’t want our science to be miscommunicated and we also don’t want to make assumptions; we just want to be clear about what we mean and what we found.”

Drawing on broad swaths of information and perspectives, including social sciences literature, is a continuation of Mattingly’s liberal arts foundation. She is conscious of its impact on the quality and scope of her work and her ability to engage with ideas and people across disciplines and cultures. She knows the difference it will make in her future career.

“Creativity and making connections between different fields is very important in all fields,” she says, “but in science these days, it has become really important. With the huge biodiversity crisis across the planet and climate change, we have some big problems going on. In order to tackle these big problems, you can’t tackle them as an individual. You’ve got to be part of a big team.”

Proper communication will be paramount.