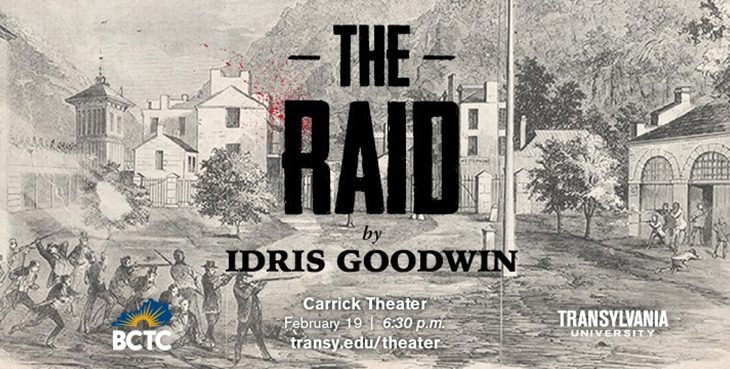 The Transylvania University and Bluegrass Community and Technical College theater departments are teaming up for Wednesday’s “The Raid by Idris Goodwin: A Staged Reading Performance.”

The free show is at 6:30 in Transylvania’s Carrick Theater, and a playwright talkback with Goodwin will follow the performance. Reserve tickets.

Centered around John Brown’s plans to raid Harpers Ferry in 1859, the production investigates the line between civic disobedience and civic duty, ultimately asking whether or not there’s such a thing as justifiable violence.

Director Tosha Fowler, who is Transylvania’s Lucille C. Little Chair of Theater and program director, said she is excited to introduce the work to the Lexington community.

Fowler met Goodwin — who is an award-winning playwright, director, poet, educator and organizer — eight years ago in Chicago while helping him workshop a new play. “I instantly recognized a truth and lyricism in which he writes and have been very lucky to work with him on a number of his plays over the years,” she said.

In Goodwin’s “The Raid,” the abolitionist Brown is convinced only bloodshed will dismantle American slavery. After fighting alongside his sons in Kansas, he plots to make real his vision: to free and arm black slaves across the South. With Frederick Douglass and Harriet Tubman conflicted, Brown heads to Harpers Ferry.

Wednesday’s production will feature a reading by an ensemble of student and professional actors.

“It’s also been a wonderful experience to partner with Tim Davis, who is the head of BCTC’s theater program, and his students,” Fowler said. “Theater’s ability to bring communities together around a variety of topics and ideas is what makes theater beautiful and a perfect example of the liberal arts in action.”