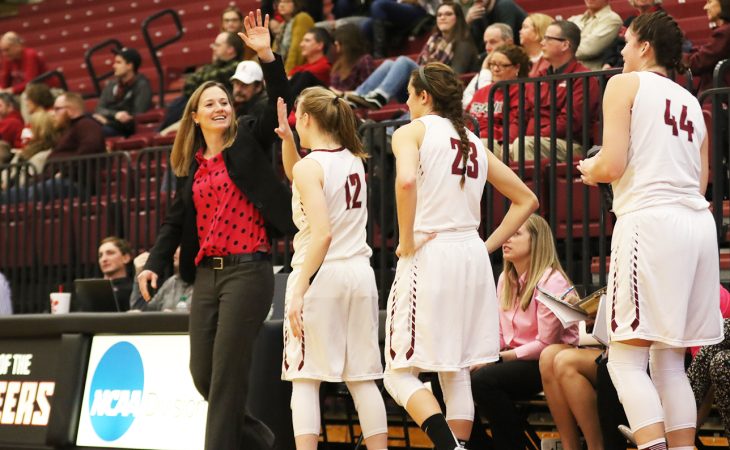 On this National Girls & Women in Sports Day, finding exemplary role models at Transylvania University to inspire young female athletes is as easy as sinking a layup in a wide-open lane.

Ranked among the nation’s top 10, the Transy women’s basketball team embodies the values promoted through this nationwide celebration, which later this week also will include a Women in Sports program on campus featuring faculty and alumnae.

For head coach Juli Fulks, the 34th annual National Girls & Women in Sports Day is not only a chance to talk about opportunities offered to female athletes, but it’s also an occasion to remember how far they’ve come. “Everything we do over the course of a season is ultimately the result of all the battles many people waged years ago to give our team these sorts of experiences,” she said. To receive the same funding as the men’s program, to be able to fly out to compete in California, these are significant achievements. “That is historically so different than what happened before Title IX,” Fulks continued, referring to the 1972 federal law mandating gender equality.

Her team this year has shown what female athletes can do when given the opportunity — that is, excel with confidence on the national stage.

“Ultimately success breeds confidence, and confidence breeds success,” Fulks said. “When you add in the national rankings and the viewpoints of others about our abilities, I think that ends up giving us more confidence. And then that confidence leads to better play, which leads to more success.”

With an 18-1 record going into tonight’s road game against Earlham, the team has been so successful this season that Fulks is looking at the possibility of hosting NCAA DIII tournament games at Transylvania’s Beck Center — possibly even through the Elite Eight.

This championship-level mindset has its own effect on the development of athletes. “Competing for championships reveals in players the real possibility of winning and losing,” Fulks said. “How do you handle the failure when that happens? You can’t win a championship if you’re not putting yourself out there and being your most vulnerable self. When you do that, you also learn how to work with others at the highest stress level.” These skills will benefit them after they graduate and join the workforce.

Competing at this level also inspires others. Each summer Fulks and her players mentor around 900 young girls during Transylvania’s basketball camps. When these kids look up to the Pioneers, they always find someone on the team who has a similar background. It’s then, Fulks said, that these campers can tell themselves: Hey, I can do this.

Diversity can also inspire. “We get a chance to showcase what we believe is one of the most important things: that we can take a group of women from every background and prove to the world that we can come together and work toward the same goal and find all of our commonalities and work through all of our differences,” Fulks said. “In this day and age, when you see the political climate, it is great to have a reminder that this is still possible. And this should still be our goal: that we can bring people together who are different and still celebrate the differences and rely on our commonalities.”