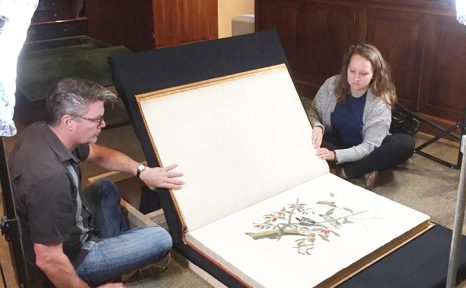 James Wagner, a biology professor at Transylvania University, was perusing his school’s well-known elephant folio edition of John James Audubon’s “Birds of America” when he became intrigued by a depiction of a yellow-bellied cuckoo in a pawpaw tree feasting on what he at first thought was a zebra swallowtail butterfly.

Looking more closely at the insect’s color pattern, Wagner realized it was actually a tiger swallowtail, which seemed an odd choice to represent in the artwork since it’s the zebra variety — not the tiger — that uses the pawpaw as a food source for its young. That got him thinking: How many other out-of-place bugs appear in Audubon’s prints, which are known for their realistic scenes? Turns out, quite a few.

Wagner’s research into the matter is so compelling that it landed on the cover of the latest issue of American Entomologist magazine. “That was exactly the place I imagined it would go, and I’m so happy it actually got there,” he said.

It all started when Special Collections Librarian BJ Gooch encouraged Wagner, who already had an interest in Audubon, to talk about the rare collection of folios with students while Gooch held the huge books open for them. After being struck by the image of the cuckoo gobbling up the butterfly, he mentioned an interest in identifying the insects in the prints to Director of the Library Susan Brown, who said off the cuff that he should do “The Bugs of America.”

So he did. And in fact, Brown’s suggestion turned out to be the title of Wagner’s article in the winter issue of American Entomologist.

He initially thought his investigation of how Audubon depicted insects would be limited to looking at just the 435 plates in Transylvania’s four-volume set of “Birds of America.” It wasn’t that easy, because Audubon wasn’t the artist behind all of what you see in his prints. “He had a lot of collaborators when making the images,” Wagner said.

Much of Wagner’s work involved finding out who drew what by comparing Audubon’s original watercolors to the published prints. Some are very different; for instance, the artist’s original depiction of a trumpeter swan is pretty much just the bird floating in space above water that isn’t very detailed. Wagner thinks an English engraver filled in details like ripples in the water and, more importantly, added an underwing moth from England — as opposed to America, where the bird is from.

Other biological anomalies include a black widow spider that will soon be the meal of a worm-eating warbler in pokeweed. Black widows, though, are much more likely to be down in rocks or in a woodpile than up in vegetation like pokeweed.

Also, would a sandpiper be chasing a short-tailed ichneumonid wasp in the bright light of the day? Likely not, as these are nocturnal insects. But kudos for such a detailed representation of a not-so-well-known wasp.

Many of the insects are depicted with field-guide realism, even though their environs or behaviors may be out of place. Others aren’t so realistic, including a seven-legged “spider” being fed to baby house wrens.

Another spider, this one dangling from a web above the open beak of a red-eyed vireo, shouldn’t have been dangling from a web in the first place. It’s a jumping spider, which doesn’t spin them. (Wagner knows a thing or two about jumping spiders.) One of Audubon’s assistants, a teenage boy, painted the spider, and then the master came in with a compass to add the erroneous web.

Additionally, Audubon’s protege Maria Martin painted a spot-on buckeye butterfly flying above a flame azalea in a scene that could be straight out of Eastern Kentucky. It’s a different, blue butterfly in the print that stumped Wagner — there aren’t many around here that color, and its wings are shaped like those of a tropical butterfly. After some digging, the professor found out it’s an atala hairstreak, probably brought to Martin from Florida not too long before they were thought to have gone extinct. (They didn’t die off and have since rebounded.)

As with Audubon’s prints, Wagner’s own research was collaborative — especially the part of the project where he took high-resolution photographs of each print for the library’s archives and so he could zoom in on the images for his studies. An engineer friend helped him design a stand for photographing the folios without damaging them, and recent Transylvania grad Nikki Fox volunteered her time to pitch in with the photography over a summer.

Wagner’s project, which revealed 76 different terrestrial arthropods in the original prints, was supported by grants from Transylvania’s David and Betty Jones Fund for Faculty Development and the Kenan Fund for Faculty and Student Enrichment.

All of this work eventually paid off with the cover article in American Entomologist, which is published by Oxford Academic. “It’s my dream come true,” Wagner said.