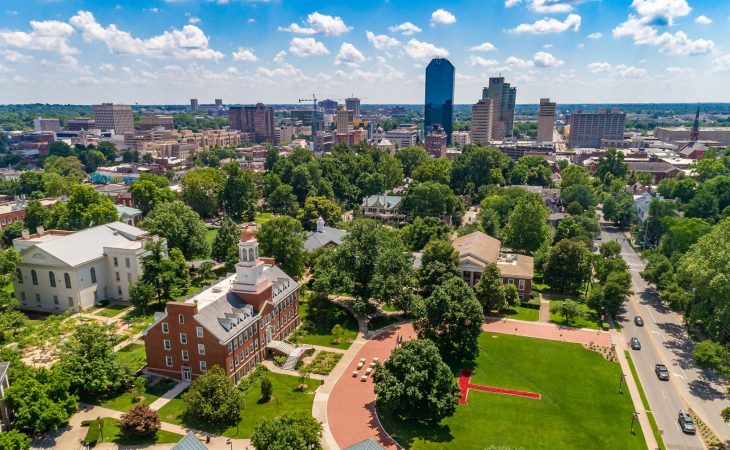 Brien Lewis has been selected to serve as the 27th president of Transylvania University. Board of Trustees Chairman William T. Young Jr. announced today that Lewis, the current president of Catawba College, will start on July 1, 2020.

“I am delighted that Brien Lewis will serve as Transylvania’s next president. His selection comes with the unanimous approval of both the Presidential Search Committee and Board of Trustees after an extensive national search that included a large pool of highly qualified and distinguished applicants,” Young said.

“Transylvania’s next president must be a catalyst, motivator and facilitator committed to the value and purpose of intellectual and personal development,” Lewis said. “Transy continues to serve as a pioneer in higher education, originating new lines of thought, activities and methods for a rapidly evolving 21st century.”

Lewis, 52, has served as president of Catawba College, a private, liberal arts college in Salisbury, North Carolina, since April 2012. During his eight-year tenure, Lewis oversaw an increase in undergraduate enrollment and improved first-year student retention; led two ambitious and successful fundraising campaigns, while increasing the college’s endowment by 87%; and created new academic and athletic programs and improved the campus infrastructure to support them.

Lewis worked as an attorney and mediator in North Carolina before moving into higher education at Winthrop University in South Carolina, where he was an associate professor of business administration, the founding dean of University College, and vice president for university development and alumni relations.

Young said Lewis’ 20 years in higher education was a key factor in the selection process. “His experience as a college president, his commitment to students’ personal and intellectual development, and his passion for shaping, delivering and providing access to the finest collegiate experience are all characteristics that influenced our decision.”

The strength of Transylvania’s existing culture, priorities and willingness to innovate drew Lewis to the 240-year-old institution. “Transylvania should build on its enduring strengths: a highly personal learning environment infused with its core commitment to academic excellence and a powerful sense of community,” he said.

Outside academia, Lewis and his wife, Laura, have invested in their local communities while raising two children: Josh, who is now in law school, and Anna Louise, who is a sophomore in college. Lewis joined the boards of the United Way, the Crosby Scholars and the UNC Nutrition Research Institute, among other organizations. In Toronto and throughout his career, he has also acted in a number of student and community theater productions.

“Laura and I are deeply honored and excited to join the Transylvania community of learners. Transylvania’s rich history and the vitality of the opportunities it offers to students today are both impressive and inspiring,” Lewis said. “We look forward to engaging with the campus and the greater Lexington community to build on the University’s commitments to excellence and innovation.”

The Transylvania Board of Trustees announced its presidential search in June of 2019. The search was managed by Isaacson Miller of Boston, who identified a deep and diverse pool of qualified candidates.

“I would like to thank the members of the Transylvania community who served on the Presidential Search Committee and who participated in the interview process,” Young said. “These trustees, faculty, staff, students and alumni had Transylvania’s long and successful history in mind as they considered who was the best candidate to lead us into the future. They can be proud of the work they have done to bring us to today’s announcement.”