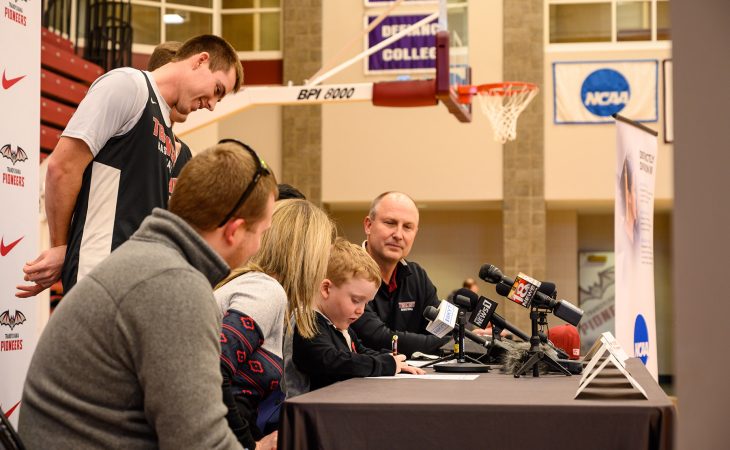 At a “Draft Day” press conference Monday, the team introduced Bentley to the Transy community and the public. He comes to Transy through a new partnership with Team Impact, a nonprofit dedicated to improving the quality of life for children facing life-threatening and chronic illnesses.

Bentley, who was nothing but smiles at the press conference, was paired with Transy Hoops because of his “skill set and character.”

Men’s basketball coach Brian Lane and two of the team’s players expressed their excitement on Bentley’s signing. Lane described Bentley as the team’s new “go-to guy,” due to both his toughness and the positive energy brings to the team. After mentioning how excited he is to work alongside the new player, Lane also made sure to let Bentley know just how important his signing is: The university president showed up for it.

Players Spencer McKinney and Gavin Root shared how grateful the team is for Bentley, saying they’re “extremely blessed to have him this season and in the years to come.”

Bentley was just as excited as the team. When asked how he was feeling at the beginning of the press conference, all he said at first was, “good,” with a shy smile. But it wasn’t long before the boy was reaching for the microphone, taking the time to answer questions from the media. He let the audience know that he’s hoping to learn some more basketball moves from the team, and that yes, he does have a favorite player on the team so far. He ended the press conference just as happy as he started it, with a “Go Transylvania!” to wrap it up.

As a new Pioneer, Bentley will attend some of the team’s practices and games, as well as spend time with the coaches and players. He is Transy Athletics’ first young player to sign with the school through Team Impact.

Watch the full press conference below: