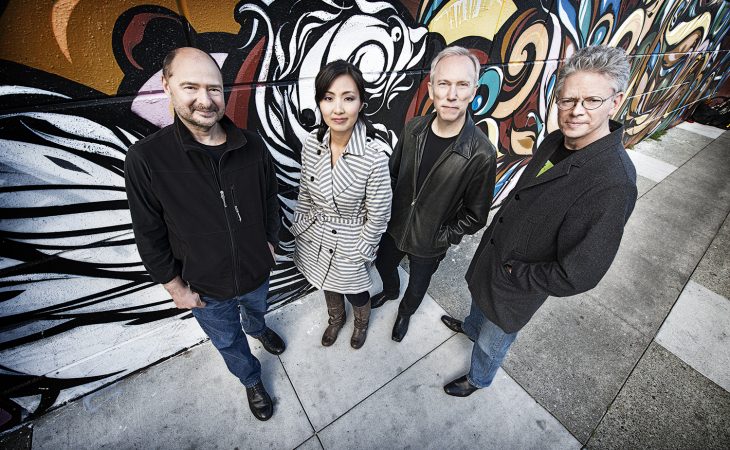 The Grammy-winning Kronos Quartet, which kicked off Transylvania University’s Smith Concert Series more than a decade ago, returns to campus Jan. 28 for another public performance in the series.

Reserve your free tickets for the 7 p.m. event in Haggin Auditorium.

For 45 years, the San Francisco ensemble has pursued a singular artistic vision, combining a spirit of fearless exploration with a commitment to continually reimagine the string quartet experience. The visit by these pioneering musicians is also part of the university’s New Frontiers series, which invites the public to go beyond the familiar and explore ideas, art and music.

Next month’s concert will feature a varied program, including music inspired by The Everly Brothers and Janis Joplin and a work by contemporary composer Philip Glass.

Kronos is one of the world’s most celebrated and influential ensembles, performing thousands of concerts, releasing more than 60 recordings, collaborating with many of the world’s most accomplished composers and performers, and commissioning over 1,000 works and arrangements for string quartet. In 2015, the group launched “50 for the Future: The Kronos Learning Repertoire,” an education and legacy project that is commissioning — and distributing online for free — 50 new works for string quartet composed by 25 women and 25 men.

“And just as exciting as what we’re going to hear in concert, the Kronos players and members of the tech crew are going to visit multiple classes as this year’s Delcamp Visiting Musicians,” said Greg Partain, music professor and chair of the Smith Series selection committee.

The Kronos ensemble kicked off the university’s Dorothy J. and Fred K. Smith Concert Series in 2007. Named after an alumni couple, the series has brought to campus high-quality musical performances by other celebrated musicians like Canadian Brass, Tiempo Libre and the Rose Ensemble.