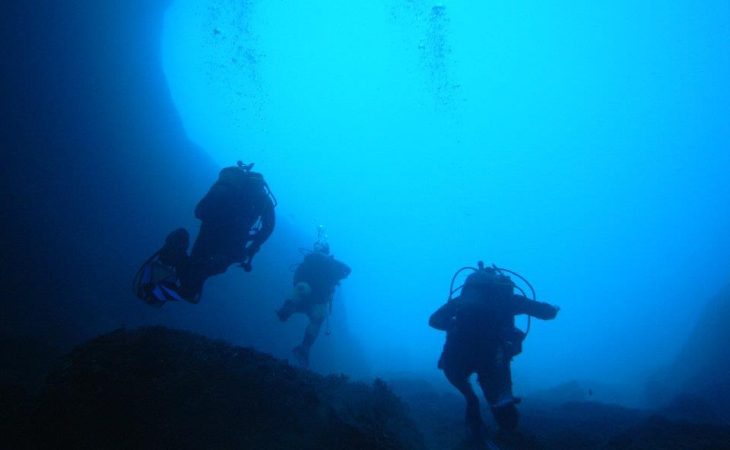 Through working with Begley, who is a 1988 Transylvania graduate and a National Geographic Explorer, these students not only learn practical fieldwork, but they also face challenges that help them grow as people.

“They have to adapt and overcome all of the unexpected issues that come up in archaeology,” Begley says. “They also get to experience what an actual archaeological project is like.” A rare opportunity for undergraduates, this kind of work can be exhausting, frustrating — even scary. “The ones that stay involved are the ones who enjoy the challenge and see a setback as another hurdle that makes it all the more interesting and rewarding.”

Much of Begley’s focus is on underwater archaeology.

This past summer he traveled to St. Vincent and the Grenadines in the Caribbean with juniors Olivia Livingston and Caroline McMahan to investigate areas with the potential for submerged archaeological sites — and they visited several known shipwrecks to determine their age and condition. The work was supported by Transylvania’s David and Betty Jones Faculty Development Fund.

“Caroline and Olivia have had the opportunity to really put underwater archaeological skills to work — from surveying new areas to mapping to diving on half a dozen shipwrecks,” Begley says.

Learning archaeological skills in real-world situations showed McMahan a possible career path. “This project gives us a glimpse of what the future could be like after graduation, continuing in underwater archaeology,” she says.

Livingston notes the value of immersing herself in a place that was new to her. “This forces us to think about our archaeological research not only as answering research questions, but also as guests, invited by our hosts to participate in the process of understanding and preserving the past.”

In addition to conducting underwater work, Begley’s students who travel abroad also learn basic field methods on land, such as mapping, photography and excavation. Some of this work includes high-tech tools; for instance, in Spain and Honduras, students helped with 3D imaging technology that Begley has been developing with University of Kentucky professor Larry Hassebrook.

Begley — and oftentimes his students — collaborate with scholars not just from across town, but throughout the world. He’s currently involved in underwater archaeology projects with Roberto Gallardo of the Guzman National Museum of Anthropology in El Salvador. This past summer they solved the mystery of a 19th-century shipwreck just off the coast — in what was one of the first investigations of a shipwreck in that country. Their work documenting the cargo of that 1850s brigantine ship revealed interesting details about El Salvador during its transition from colonialism to independence, from the types of dishes they used to construction materials.

Begley has worked with a long list of other researchers abroad, including those at the Museum of the Sea in Sicily, the International Centre for Underwater Archaeology in Croatia and the Albanian Institute of Marine Sciences. (He also explored the Honduran rainforest with actor Ewan McGregor for a BBC documentary.)

Whether students are getting to meet international scholars or map a shipwreck, Begley sees these experiences as giving them an edge in future endeavors. In fact, one of his former students said when she got to graduate school she was the only one of her incoming class who had participated in an underwater archaeological project.

“Students benefit from this work because they get to see a project from start to finish — from conceptualizing it to managing the logistics in the field,” Begley says. Students also learn how to formulate research questions and to make sense of data they collect. “They get to see the scientific project in action.”