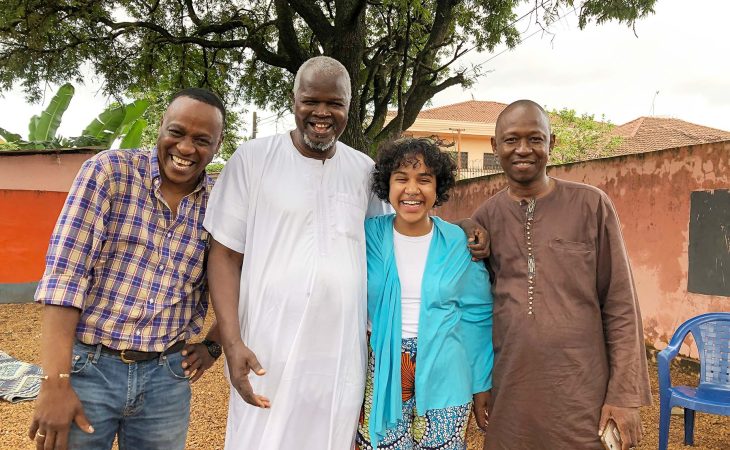 Comprehending how we fit into the world inevitably relates back to knowing who we are.

Diaka Savané ’20 grew up fascinated by the stories of her parents who met in Guinea during her mother’s service in the Peace Corps. Their memories piqued her interest in international travel and cultures, and in her family in West Africa.

Coming of age in Lexington, Savané got to know the family of her mother, jewelry designer Rachel Savané, but the questions she had long entertained about her father’s family in West Africa became deeper and more compelling. She longed to meet and communicate with the French-speaking family of her father, Lexington restaurateur Mamadou Savané, and to comprehend the many dimensions of his childhood.

She remembers, as a girl, being unable to conceptualize the more than 100 relatives of her father’s extended family, and how she sought “the full image” behind the family photos. “I wanted to understand what it was like to grow up there and to be in that environment,” she recalls.

But before she could get to know her family, Savané needed to think and write in French. And then find the means to travel to Guinea.

With the help of a French immersion scholarship endowed by 1961 graduates Douglas and Marilyn Estridge Cardwell, Savané was able to gain intimate knowledge of French by living with a host family in France. Then, in the summer before her senior year, with support from the Kenan Fund for Faculty and Student Enrichment, she at last traveled to Guinea.

Guided by adviser Kremena Todorova, associate professor of English, to make the focus of her oral history project about family, Savané embraced the concept of an autoethnographic study, gathering stories of her family and placing them in a broader socio-political and cultural context.

“History in Guinea is always told orally,” she explains. “My project was to immortalize that.”

Rather than a more formal audio recording device, she chose to write in journals in French. “It made more sense,” she says. “That’s how I was absorbing it.” Communicating in French allowed her to get close to family members. “Speaking English would have been a step removed.”

Through story, she learned not just details of family members, events and history, but “how people interact,” she says. “They spoke to me about how they grew up.” Uncles shared memories of her father that gave her a sense of the freedom he enjoyed in childhood.

She placed herself within a lineage that named every first-born female “Diaka.” She derived confidence from the stories of bravery about her grandmother Diaka. This information, particularly in an oral tradition, is difficult to come by without multiple family members sharing their knowledge.

Now, after Guinea, her family no longer feels distant. She understands where she and her father fit into their extensive family. This awareness is important to her.

So too, are the broader social revelations: the “solidarity of the populations” she observed, the importance of relationships and the welcoming generosity. Offering examples, she remembers complimenting a woman on her bracelet: “Here, have it,” the woman proffered.  And how, “when people stop by the house just to say hello or ask a question,” she says, “you nourish them, even if you don’t have the means.”

At Transy, Savané is a student leader active in social justice issues, a First Engagements scholar and coordinator and a recipient of the Charles and Susan Shearer Scholarship. As she works toward graduation in May, she is completing Transy’s Peace Corps Prep Program. She hopes to take her years of tutoring experience at the Carnegie Center and teach abroad through the Peace Corps and other programs before pursuing her “dream career” as a foreign service officer.

“I love being around different people and listening to different languages — just hearing about where people grew up, and how that’s different from where I grew up,” she concludes with enthusiasm.