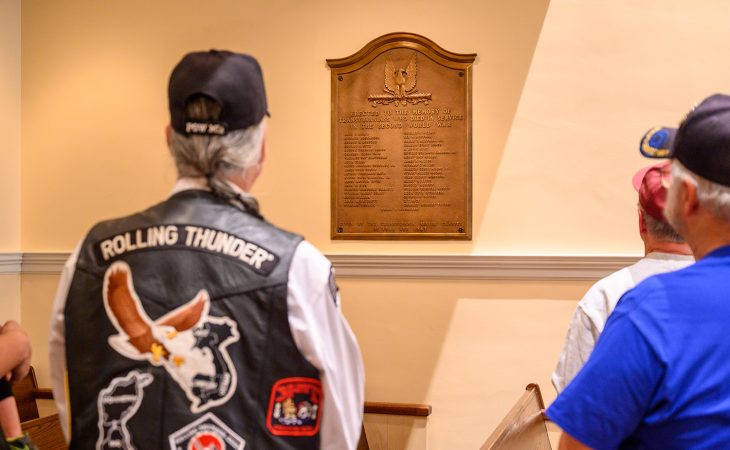 Transylvania University on Wednesday rededicated memorial plaques honoring Transylvanians who lost their lives in service to our country during World War I and World War II.

The plaques recently were returned to Old Morrison Chapel after being removed for renovations. One of the large bronze plaques was originally a gift from the classes of 1946 and ’47.

“For over two centuries now Transylvanians have served our world in many different ways, but for the ones we remember today, that service required the sacrifice of their lives,” said Interim President John N. Williams ’74 during the ceremony. “In commemoration of their service and sacrifice, we urge all Transylvanians to work together on our campus and in our communities toward peace for all of humankind.”

In attendance were members of the family of Ensign William C. “Billy” Hedrick Jr. ’40, who died after the USS Strong was torpedoed and sank. They were joined by representatives from the state and federal Department of Veteran Affairs and members of the Rolling Thunder Kentucky Chapter 5. Faculty, staff and a current student from Hedrick’s Phi Kappa Tau fraternity also attended.

“I think my uncle Billy and the others would be happy to be so thoughtfully remembered,” said Hedrick’s great niece Tammi Hedrick Johnson, who along with Transylvania staff helped to put the plaques on display again. “It’s appropriate that they’re back home now.”

Johnson also thanked Williams and other staff members for “taking this to heart” and keeping the memories alive of these men who made the ultimate sacrifice.