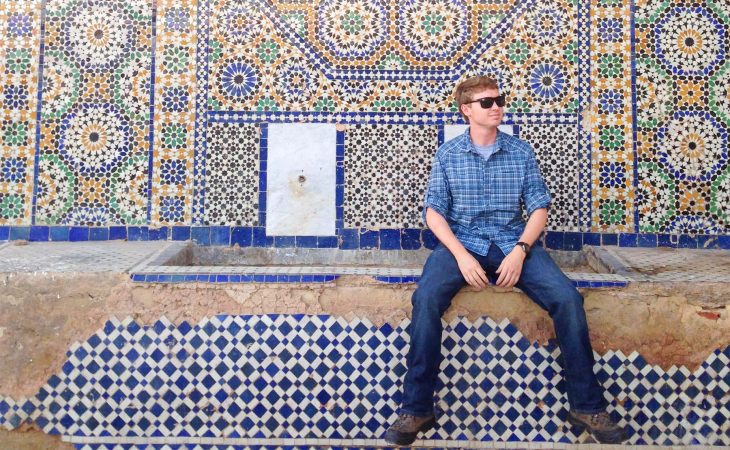 William Burriss ’13 grew up in a family dedicated to service — from the military to civilian government. So the ideal of working for the greater good has been ingrained in him since an early age.

After graduating Transylvania, Burriss served as a congressional staffer in the U.S. House of Representatives and then as a Peace Corps youth and community development specialist in Morocco. Now he advocates for the Peace Corps mission and community as a government relations officer.

“I settled on the Peace Corps pretty early,” he says. First it sounded like a cool adventure, but then his motivation evolved into something more altruistic.

Burriss worked for two years in a small Berber and Arab village outside Marrakech, where olive groves meet the foothills of the Atlas Mountains. “It was a spectacular opportunity,” he says.

With the help of local partners, he opened up a humble community youth center, which featured the village’s first multimedia library. The facility was built after the Arab Spring movement to improve youth employability, promote healthy lifestyles, etc. “But they never hired anybody to open this place up,” Burriss says.

He dusted things off, set up computers, secured international donations for the library and instructed villagers in subjects like English and computer literacy. Additionally, at the University of Marrakech he taught a master’s level course on creative writing that focused on positive social change. For the class, he used a liberal arts, multidisciplinary approach he learned at Transylvania. He also helped lead a foreign affairs club at the Marrakech American Corner, which the State Department sponsors.

While in Morocco, Burriss wrote a memo about how Peace Corps volunteers can better lobby Congress. It ended up being shared with the National Peace Corps Association, which is a nonprofit supporting returned volunteers and advocating for the agency. The Peace Corps general counsel approved the memo, which put Burriss on the agency’s radar. He got a job out of it, in fact.

In his Peace Corps role, Burriss has worked with the office of Congressman Andy Barr, whose district includes Lexington and who serves on the Congressional Peace Corps Caucus. Burriss says if he’s asking lawmakers to increase or maintain funding for the agency, he’ll point out things like how many of their districts’ members serve in the Peace Corps, and whether there are affiliate groups — such as a prep program like the one at Transylvania — in the area.

While his alma mater’s prep program started after he graduated, Burriss says the university’s faculty and staff were supportive of his career plans.

He also appreciates how he was pushed to excel in the classroom. “The standards of excellence demanded by so many of my professors truly gave me an edge,” he says. “I don’t think I would have started down this path without my political science degree from Transylvania.”