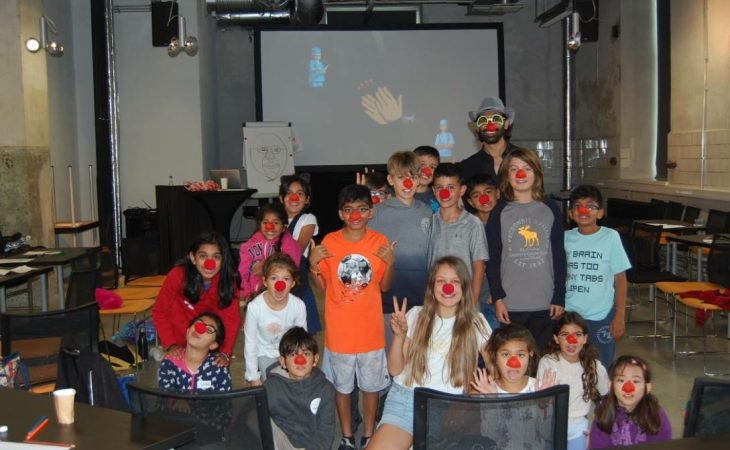 Dr. Amit Patel ’99 sat in the airport, waiting to board a plane to Ecuador, and he was uncomfortable. It had less to do with healing from a recent skiing accident, and more to do with the fact that he was dressed as a clown.

He was on his way to a mission trip with Patch Adams, the famed doctor and founder of the Gesundheit! Institute, which teaches holistic medical care. Adams has become well known for dressing up as a clown to encourage laughter and joy as therapeutic method of healing, especially with children.

Patel is a surgeon at the University of Kentucky who specializes in facial plastic and reconstructive surgery. It’s a field that combines his many interests — medicine, art, architecture, biology and, lately, communication.

“The part I really enjoy that I never thought I’d put into it is the art of human connection,” Patel says. “I’ve learned how to communicate with people, whether it’s with a small group in a conference room discussing how to solve a problem, meeting with a radiation oncologist or talking directly with patients.”

So when his accident forced him to take a short break from surgery, he reached out to the Gesundheit! Institute and the School for Designing and Society, who invited him on the trip to Ecuador. He and the other doctors visited pediatric hospitals, asylums, prisons and smallpox colonies, dressed as clowns, and not speaking with the patients directly. The goal was to build their nonverbal communication skills and use comedy for connection and comfort.

“We would drop into an inner-city hospital with a full waiting room, and our job was — without saying a word — to establish authentic connection,” he says. “It was a classroom I never thought I’d end up in. You can talk about empathy, but when you’re using completely different tools, it’s very powerful.”

Patel now uses what he learned to speak around the world about creativity and empathy and how they pertain to his role as a facial surgeon. He’s spoken in Paris, France; Cairo, Egypt; Nairobi, Kenya; and Tallin, Estonia, to doctors, medical associations and even groups of children.

And he uses laughter therapy in his own practice to help patients navigate through often life-changing procedures that leave them unsure and unconfident.

One of the greatest lessons he’s learned from his travels, he says, is to become comfortable with discomfort. It’s a lesson that began when he arrived in Lexington from Owensboro, Kentucky, as a biology major at Transy. Not only did he hone the interests that would guide him to his future career by taking classes like Ceramics and Medical Illustration, but he learned vital communication and adaptation skills that continue to pay off in his medical practice and his work abroad.

“Lexington was a big city for me,” he says. “But a lot of seeds for how to communicate and how to interact with people from different backgrounds and mindsets were planted at Transy. A creative liberal arts background is integral to what I do on a daily basis.”