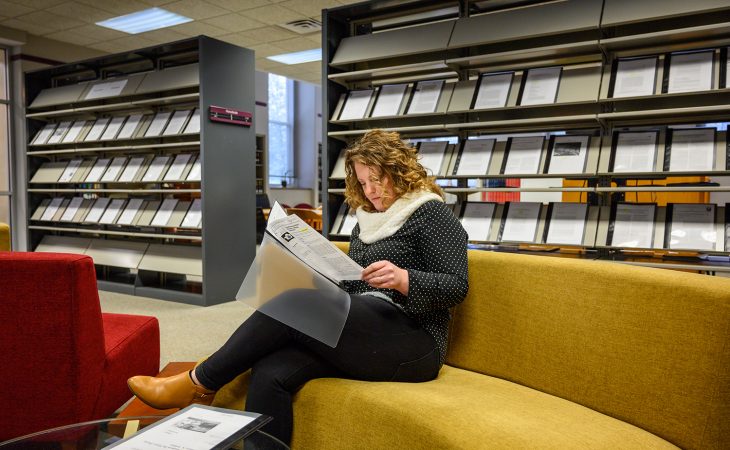 Transylvania University has a long, rich history of scholarship, but until recently you couldn’t stand in one spot and see the professors’ published works laid out in front of you.

As of this month, articles, poems and other writings of Transylvania scholars published in journals and magazines in the last three years are on display in the university’s library — from Maurice Manning’s poem “An Orchard at the Bottom of a Hill” in Time magazine to Jessie Brown’s “Expanding the Frontiers of Non-Aqueous Transuranic Molecular Chemistry” in Actinide Research Quarterly.

The J. Douglas Gay Jr./Frances Carrick Thomas Library already linked to the works written by Transylvania scholars online, in addition to setting aside shelves for books containing their writings. Books, though, are easier to browse on a shelf because of the information on the spines — something you don’t get from printed-out articles in slim, plastic folders, which now have the space to be laid out faceup on shelves that became available because of a reduction in the number of paper periodicals.

Director of the Library Susan Brown said she had been bothered that the articles hadn’t been on display, because they represent such a large portion of the school’s scholarly work.

Now library visitors will “know what kind of scholarship the faculty, staff and students of Transylvania are creating for the world,” Brown said. “This is part of the influence that we have.”

Also, because students go through a similar process with their own coursework — write a paper, submit, get a response, rewrite, resubmit — they can relate to their professors’ final works on display, Brown said. “It helps to inspire students.”