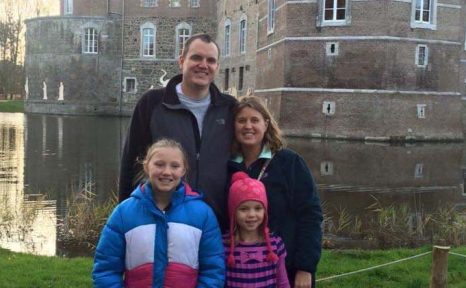 Have you ever considered what it’s like for students of military kids growing up abroad, moving around with their parents and continually having to make new friends in different countries?

Matt ’00 and Melissa McDougal ’00 Koger know firsthand — Matt grew up in the Department of Defense Education Activity (DoDEA) school system with a father who was active duty military, and Melissa’s father, Stan McDougal ’70, was in the U.S. Air Force Reserves. They appreciated this unique way for kids to get acquainted with the world, and they always wanted to find a way to give back to that community. The Kogers both worked in Anderson County, Kentucky, schools — Matt as a school psychologist and Melissa as a teacher — and they considered finishing their careers overseas once their two daughters had grown up.

But their youngest battled through some health trouble when she was young, and it helped the Kogers realize: Why not give them the same opportunity? So Melissa found a position at a DoDEA district office in Puerto Rico working with teachers to improve their instructional skills, and the family packed up and moved there for 15 months.

Then, four years ago, when a school psychology opportunity opened up for Matt at a DoDEA school in the Netherlands, they moved again, and they have been working at AF North International School ever since.

The school is divided into U.S., British, Canadian and German sections, and within those sections, every NATO nation is represented. Melissa has taught students from places like Azerbaijan, Finland and Lithuania, and the girls are thriving in a world wholly different from the one they knew in the U.S.

“They’re learning about the Dutch culture and the history of the Netherlands, and they did the same in Puerto Rico,” Melissa says. “It gives them another perspective on life, seeing all these cultures.”

Matt adds, “They’re learning a greater worldview, that not everything is always so America-centric. It’s a world of cultures that they’ll be able to interact with internationally, and hopefully in their futures they’ll be able to work in environments that appreciate diversity and recognize the opportunities that other cultures can bring to the world.”

Interestingly, this idea never really occurred to them as undergraduates dating at Transylvania. But they realize now that their education was readying them to tackle issues that face students growing up in this unusual situation, along with the everyday challenges that children navigate.

“The coursework at Transy prepares you for that,” Matt says. “Especially in the social sciences and education, you learn to deal with populations that have difficulties. Here we’re dealing with parents who are being deployed, and frequent school changes is a unique challenge. But it’s a resilient group of kids that are able to effectively transition and meet new friends, and sometimes their paths end up crossing again.”

It’s rewarding work that the Kogers have no plans to give up anytime soon. They say they plan to stay in the Netherlands indefinitely, keeping their global education adventure alive.