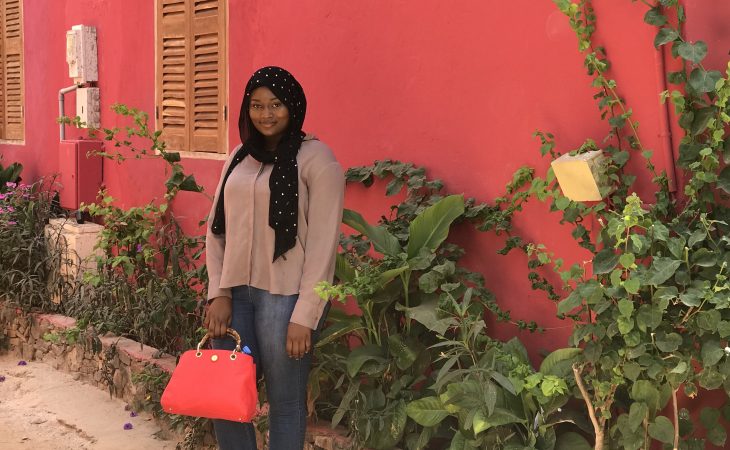 “If you study you’ll become something greater than yourself.”

From a mother’s song in Wolof, a language of Senegal

At the age of 3, Aissata Sackho ’21 traveled to the Republic of Senegal in West Africa to spend her childhood among extended family. Returning to her native U.S. to attend secondary school, then college at Transylvania, she soon realized how being part of two nations and cultures gave her a special vantage point.

Now a junior, Sackho possesses a wisdom that allows her to see the best of both countries — and the potential of each. A double major in international affairs and French, a 2019 First Engagements scholar, and a recent recipient of a Benjamin A. Gilman International Scholarship, she is committed to helping the place of her childhood.

Last summer, with support from the Kenan Fund for Faculty and Student Enrichment, Sackho returned to Senegal for the first time since her departure as a young teen. Exploring the education system and the role of women in community engagement, she identified impediments that keep some children from advancing. She was particularly attuned to the reality of many girls who, encouraged to marry young, forfeit their education and any hope of ever being independent or able to earn a living.

“In our world,” she notes, “we need education to bring light into darkness.”

The first in her family to attend college, Sackho has witnessed the value of education in her own life. She recognizes that, as with so many in the world, becoming educated requires surpassing cultural expectations and a reprioritization of values.

Spending time in Fouta and in the village of Guedé, Sackho observed that schools often lack technology and basic resources. On rainy days, she recalls, classes would be canceled because the school floor was drenched. But she couldn’t help thinking that these seemed like fairly easy fixes with stronger government funding. She now dreams of helping children receive a quality education.

Education, Sackho reflects, brings opportunity and a form of insurance to individuals and, more broadly, to the nation.

In October, she presented at a conference in San Antonio, Texas, alongside Brian Arganbright, professor of French, and Ousmane Pame, president of the Global Ecovillage Network/Africa. They discussed purposeful global learning experiences. Sackho notes that Pame’s life and community development work have been an inspiration to her.

“He came back to give back,” she notes of his return to Senegal. It’s the same spirit of generosity she experienced in the communities she visited.

After Transy, Sackho hopes to gain experience by training with NGOs, and then working with Senegal’s government to prioritize and invest in education for all people — girls and boys alike. She knows the challenges, yet can see all that’s ready to be accomplished. She only wishes she could begin today.