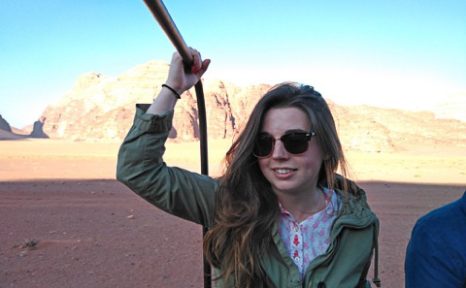 “When the well is dry, we will know the worth of water.”

I set out to conquer the Negev Desert, intent on beating the persistent mid-summer heat. No one could say we were unprepared: five liters of water each, electrolyte tablets, copious amounts of sunscreen. Yet deep within the desolate wilderness, my pack ran dry. My new reality insisted on rationing and had zero tolerance for careless drinking. I lagged behind my companions as we ambled for what seemed like days. With temperatures soaring over 100 degrees, I caught a glimpse of a reality that millions face daily.

Six months prior, I boarded my flight to Tel Aviv, Israel, beginning my semester abroad knowing little of the transformational experience that awaited me. Back on campus at Transy, I had intensely studied the Middle East, the Israeli-Palestinian conflict, the violence; I had read the books, discussed the issues, done the research. Yet, for all the book knowledge, daily life existed deep in a web of complexities I never could have imagined from within the confines of the classroom.

In class, however, all the study hours and endless readings over the past years paid off. I slipped easily into an academic routine, giving me more time to focus on disentangling my new sociocultural realities. I learned how to balance exploration with paper writing, deal with homesickness and make the most of my limited time — lessons that would follow me as I moved to Italy for my first year of graduate study.

At the risk of sounding cliché, my experience profoundly impacted me in ways which I am still discovering. Some variation of this statement can be heard from most students returning from their time abroad, whether it be in reference to personal growth, new friends or global awareness. For me, going to Israel illuminated my career path; it gave me a direction, a passion. It shapes my graduate studies at the Johns Hopkins School of Advanced International Study; my interests in conflict management and energy, resources and environment; the list of jobs for which I am currently applying; and all the research papers written since my return.

Pure coincidence landed me in a class on water resources and conflict. A series of field trips took me from the Gazan border with its integrated wastewater and desalination plants to the West Bank and its wadis, deep ravines lined with hoses attempting to capture any stray water. The symptoms of water insecurity followed me everywhere I went: water tanks atop homes, illegal wells around villages. Palestinians lived in fear of having their water shut off in retaliation for terror attacks; Israelis lived in fear of hostile nations undermining their freshwater supply.

The issue of water security captured my attention. I could see the reality all around me. In small ways, I lived this daily: limited showers, the potential that the water tank would run dry, zero days of rain in the seven months I was there. However, it was not until that day in the desert that I began to comprehend how all-consuming the idea of water can be when one experiences true uncertainty. Thirsty, dusty and tired in the wilderness, I realized I would spend my life working on water.

Though my journey began in Israel, the reality of water insecurity flows through the fabric of life across the globe. This passion has taken me from the rural strongholds of Eastern Kentucky where outhouses and dry taps are commonplace, to the urbanized centers of Italy with its failing water infrastructure, to the high altitude of Bolivia and its indigenous population who continue to experience marginalized service access and, finally, back to our nation’s capital. Wherever the path leads next, I strive to leave each place knowing fewer people will worry about their water access than they did the day before.

As an undergraduate, Lauren Gilbert ’18 arrived in Israel without knowing the Hebrew alphabet. Not long after completing an intensive language course, the William T. Young scholar was able to read, write and present in her new language. By chance, to fill an extra course credit, she took a class on water security.

“Water resources in the Middle East sounded intriguing,” she remembers thinking. Given her interest in intelligence and national security, she adds, “I thought there would be implications.” Indeed, there was so much to be learned about water security issues throughout the world that she wondered, “Why aren’t the alarms going off everywhere?” She returned to Transy inspired to pursue water policy as her postgraduate path.

Now, after a year in graduate school in Bologna, Italy, and a summer interning in the U.S. embassy in La Paz, Bolivia, Gilbert is completing the second year of her master’s degree at the Johns Hopkins University School of Advanced International Study. She’s already gaining experience working with a development consulting group on infrastructure projects in Latin America. Ultimately, she wants to help ensure that all people, from Lexington to La Paz, have access to clean water.

About the author: Lauren Gilbert ’18 is currently working as a Latin America business development associate. She is completing a graduate degree at Johns Hopkins University.